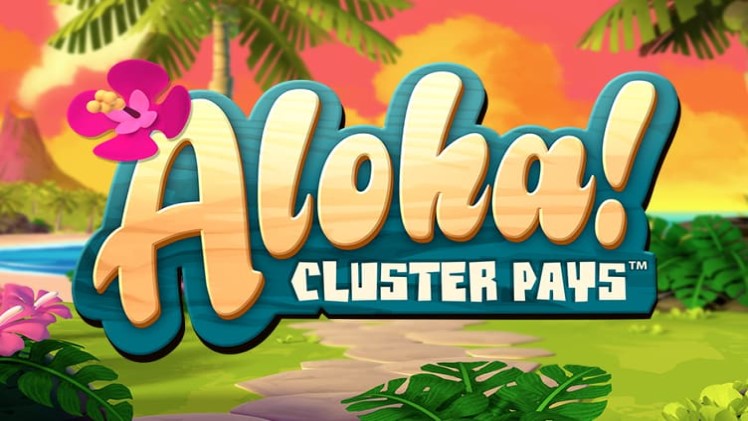 Aloha! Cluster Pays was developed by gaming giants NetEnt and released in 2016 as their first Cluster Pays slot.  The game is available to play on desktop, mobile and tablet devices. Wagers can be as little as 10p to a maximum of £200 per spin – play the game here.

A Cluster Pays slot does not have paylines and the symbols need to be in a cluster either vertically, horizontally or adjacent to each other. A minimum of nine symbols is classed as a cluster; however, if the symbols are not adjacent to each other then the game may pay out as a separate cluster. There is also an option of stacked symbols that then counts as two symbols. Cluster Pays slot games are slightly less rigid than a normal slot game as the paylines are more rigid than a cluster. The grid will usually be six reels and five rows too.

Aloha! Cluster Pays is a Hawaiian themed game, Aloha meaning love, peace and compassion and is used as a greeting in Hawaii. The graphics and sounds are of calming oceans and island like audio with images of fresh fruits and seashells making up the symbols.

A cluster of nine symbols will activate the Sticky Wins Re-spin feature and the original cluster will stay in place while the other symbols re-spin, if the winning cluster size increases then the symbols that lead to the increase will also stick with another re-spin awarded. This will continue until there is no room for any more symbols or there isn’t a symbol that increases the cluster, a substitution symbol can then appear which will then change into the adjacent symbol to give the player the biggest win in a cluster.

Unlike some games there is no extra cost for the re-spin feature and therefore the player won’t be gambling the existing win. The lower value symbols are traditionally Hawaiian and are coconuts, seashells, pineapples, and wild flowers with the higher paying symbols being Tiki heads; these are the size of two normal reel symbols to increase the chances of a cluster. The games wild is a symbol of a question mark carved onto a piece of wood.

In addition to all of these features the game offers its own Tiki man to encourage players through the excitement of the game.