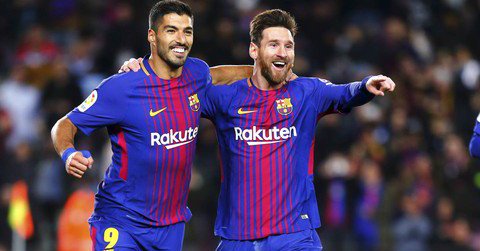 Barcelona star LIONEL MESSI thinks Cristiano Ronaldo’s supremacy will come to an end if Neymar’s Paris Saint-Germain knock Real Madrid out of the Champions League. That’s according to Spanish outlet Don Balon, who say the Barcelona star lionel Messi  has sent a last-minute good luck message to his former team-mate ahead of tonight’s clash. Messi and Ronaldo have battled it out in La Liga since 2009 when the Portuguese made his £80m move from Manchester United to Real. And during that time they’ve shared the prestigious Ballon d’Or award with Neymar now emerging as their closest rival.Ronaldo can put himself in a good position to once again be named the world’s best player if he helps Real past PSG and they go on to win the Champions League. Neymar will spearhead the Ligue 1 outfit’s attack as they look to gain an advantage at the Bernabeu tonight.And Messi has apparently been in touch with him to ‘wish him all the luck in the world’. Messi and Neymar remain on good terms despite the Brazilian ditching Barcelona last summer.And they’ve supposedly promised to put themselves against each other in May’s Champions League final. Messi is not alone in supporting Neymar, with all of his ex-Barcelona team-mates said to be in his corner too. source of articles]]>