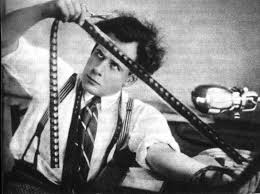 Google honours Sergei Eisenstein, the ‘father of the montage’

Sergei Eisenstein is also called Father of Montage. Today Google has dedicated Doodle to the film director of the Soviet (Russia) and film theorist Sergey Mikhailovich Eisenstein. Google has created a doodle titled Sergei Eisenstein’s 120th birthday. Sergei Eisenstein was born in Latvia in 1898. At that time it was
part of the Russian Empire.The son of an affluent architect, Eisenstein attended the Institute of Civil Engineering in Petrograd as a young man. With the fall of the tsar in 1917, he worked as an engineer for the Red Army.

Eisenstein is best known as the pioneer of the montage, a technique featuring a series of shorter shots used to capture periods of time or other themes. The technique is widely used in filmmaking today.Working initially as a director and designer, he became intensely interested in cultural theory and wrote the treatise
Montage of Attractions in 1923. This led to his making his first film, Gulmov’s Diary, the same year, an adaptation of one his own experimental theatre production

isenstein remains best known for the silent montage films that followed – Strike (1925), the ground-breaking Battleship Potemkin (1925) and October (1928), commissioned to celebrate the tenth anniversary of the October Revolution.

His films were also revolutionary in another sense, as he often depicted the struggle of downtrodden workers against the ruling class, like Alexander Dovzhenko, Vsevolod Pudovkin and Dziga Vertov at a time when the
progressive nature of Russian art left the world trailing in its wake. Only D.W. Griffith in the US and the likes of Fritz Lang, F.W. Murnau and Robert Wiene at Germany’s UFA studios came close to producing work to match their extraordinary output.

The international acclaim with which Eisenstein’s films were greeted saw him permitted to tour the world in the early 1930s, visiting Europe, Japan, the US and Mexico. The director was particularly smitten with the latter country where he socialised with Frida Kahlo and Diego Rivera and commenced an ambitious chronicle of Mexican history entitled Que Viva Mexico! that sadly remains one of cinema’s great uncompleted works. Eisenstein’s long sojourn in Mexico saw a worried Joseph Stalin send a telegram asking if he had deserted the Soviet Union.

Alexander Nevsky (1938) and the two-part Ivan The Terrible (1944 and 1958), that have left the most enduring impact on modern filmmaking. Both are vivid accounts of near-mythic men undertaken on a huge canvas, starring the great actor Nikolai Cherkasov and boasting scores composed by Sergei Prokofiev. As a marriage of music and action, the famous “Battle on the Ice” sequence from Alexander Nevsky, in particular, is once seen, never forgotten.