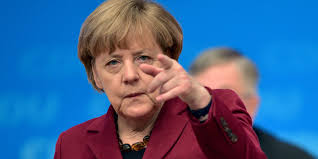 Merkel, weakened by an election setback in September, turned to the left-leaning SPD to seek a re-run of their so-called “grand coalition” after the collapse in November of talks on a three-way coalition untested at national level. The chancellor, who has won widespread respect abroad in more than 12 years in power, needs the coalition talks to succeed to avoid her personal authority being further undermined and Germany’s international standing diminished.

Speaking at the start of the final day of exploratory talks that could lead to formal negotiations, Merkel said it would be a tough day but she recognised that Germans expected results. “Of course we also have in mind that we have to create a good policy platform for our country. So it’s going to be a tough day,” she said.

SPD leader Martin Schulz, a former president of the European Parliament, made clear his priority was Europe. “On the last day of exploratory talks we will make clear that above all this must be a new start for the European Union,” he told reporters. “If we join a government it will be on the condition that it makes Europe strong.”

Schulz has called for a United States of Europe by 2025 – an idea rejected by senior conservatives, many of whom are wary of such ambitious reform plans that they worry could see Germany funnel more of its taxpayers’ money to other EU states.

However, Merkel helped lead Europe through its twin euro zone and refugee crises and is adept at finding compromises, especially on European issues. Should the parties fail to reach a deal on Thursday they could extend the talks, though President Frank-Walter Steinmeier is eager for an agreement, keenly aware that businesses want a stable coalition to end the uncertainty and avoid another vote. Participants have described the negotiations as “good”, but SPD leaders need to convince their party members and are offering them a vote on Jan. 21 on whether to proceed.

Merkel has ruled with the SPD in a sometimes unwieldy “grand coalition” in two of her three previous terms in office, including in the last parliament from 2013-2017. But both parties bled support in the Sept. 24 election, which saw the far-right Alternative for Germany (AfD) enter the Bundestag lower house of parliament for the first time.

Many in the SPD rank-and-file oppose a repeat of the grand coalition as they fear it will further diminish the identity of the party, which suffered its worst result in September’s vote since the modern Federal Republic was founded in 1949.

Some SPD members are also concerned that a new grand coalition would make the AfD the main opposition party. Should the two biggest party groups fail to agree on moving ahead, Merkel could try to form a minority government or Germany could face new elections.