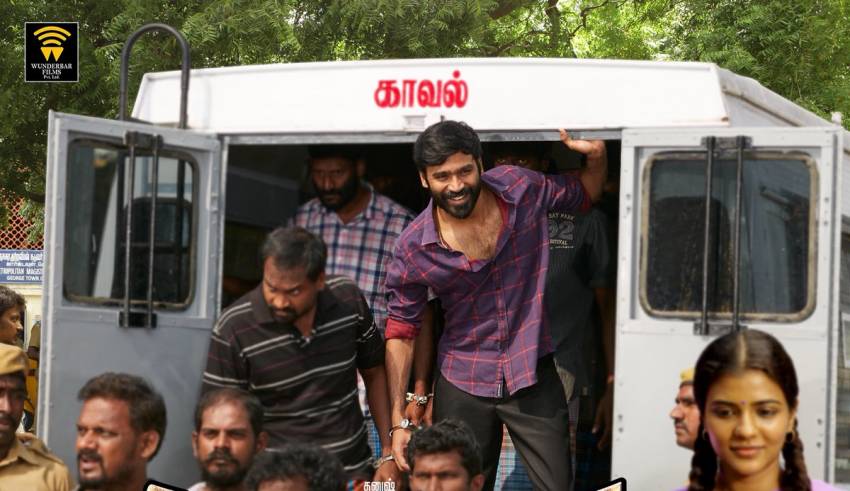 South superstar Dhanush unveils the first look of his upcoming film Vada Chennai Meet Dhanush as Vetrimaran’s Anbu Dhanush’s Wunderbar Films on Thursday shared the first look of its upcoming film Vada Chennai, directed and written by VetrimaaranA project that has been in the making for three years, Tweeting the poster, Dhanush revealed the name of his character – ‘Anbu’ (love) Vada Chennai, meaning North Chennai, chronicles the lives of the residents of a village over 35 years. The poster features Dhanush’s character, Anbu, stepping out of the back of a police van in handcuffs. The release date has not been finalised.the poster has Dhanush standing on the footsteps of a police van, looking at Aishwarya Rajesh who is walking away from the van with a smile. With the other faces blurred, the faces of Dhanush and Aishwarya stand out in an indication of a strong relationship story on the cards. Notably, this is the first time the Aadukalam star has been paired opposite Aishwarya, one of the promising names in Kollywood. According to reports, Aishwarya plays the role of a woman named Padma.

A second poster shows Anbu suspended from a height and holding on to a rope with a dagger in his mouth. The makers have not disclosed details about Dhanush’s character.Vada Chennai also stars Ameer, Samuthirakani and Andre Jeremiah who are playing characters named Rajan, Guna and Chandra. Reports also suggest that the film’s story traverses over 35 years and hence will be a trilogy. Actor-filmmaker Ameer has been brought in as the replacement for actor Vijay Sethupathi, who walked out of Vada Chennai following date issues. Vijay Sethupathi was to play a brief role in the film. “Ameer has replaced Vijay in the film. It’s an intense role and Vetrimaaran, amidst his other options, really felt Ameer can pull it off. He will join the sets from the film’s next schedule,” a source from the film’s unit told IANS.

The film will mark Dhanush’s third collaboration with four time national award winning filmmaker Vetrimaaran. The two have previously worked in Polladhavan and Aadukulam. Apart from working in these films the duo has also jointly produced critically-acclaimed films Kaaka Muttai and Visaaranai. In 2013, Dhanush made his Hindi debut with Rai’s Raanjhanaa, which even earned him the best debut Filmfare award. Talking about his Bollywood sojourn, he said: “I don’t plan my career and let things happen organically. I let things fall in place and then do it with all my heart. You should meet the right people at the right time. That’s how Bollywood happened.” Dhanush, son-in-law of megstar Rajinikanth is all set to make his Hollywood debut this year with The Extraordinary Journey of The Fakir, based on the popular novel of the same name. “Irrespective of the industry I work in, I’m constantly learning from the people I work with. If Bollywood taught me a lot about production, Hollywood has been a revelation in terms of understanding filmmaking better,” Dhanush told IANS.the music of the film given  by Santhosh Narayanan and is produced by Dhanush himself. Reports also suggest that the delay in the project is due to an overshot budget which led to Dhanush acting in a few other films before returning to the project.    ]]>