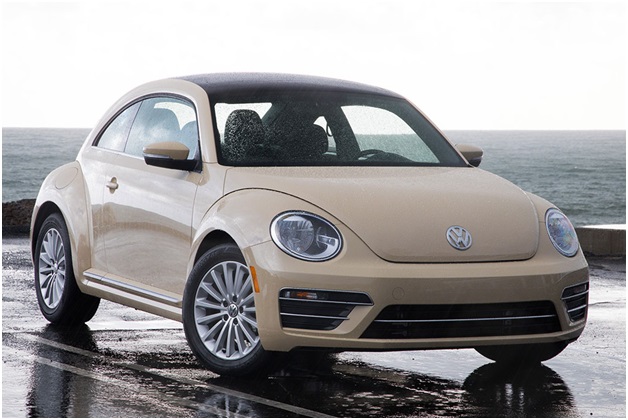 Volkswagen announced the final rollout of the iconic Beetle, it’s most popular and effervescent product with two new editions the Final Edition SE and Final Edition SE both of which are no less than collector editions, not that the S and SE aren’t. There is something enticing about the Beetle that managed to hang on to its legacy design curves and the addition modern accents and up to date technology might be one of the reasons behind its continuing popularity. We check out these features from various angles. If the Volkswagen dealer near Ontario is to be trusted, the Beetle is still the most sought out model from the entire lineup when it comes to the line-up of compacts, others comprising entirely of the Golf variants.

There was never any reason for Volkswagen to completely change the curvy body shape of the Volkswagen Beetle through its entire lifespan. After all this was what dreams are made of, the heart throb of millions around the world. VW came out with two new color tones to create a lasting memory with the final editions, the Safari Uni and Stonewashed Blue. The latest editions portray extremely refined sporty looks which can be attributed to the addition of sport style bumpers and a protruding rear spoiler. Power operated side mirrors add convenience on the outside. If LED headlights don’t impress you, there are the available Bi-Xenon headlights and LED daytime running lights. Also available is an option to add a panoramic moonroof with power tilt and slide. You also can add more style with the addition of 17-inch or 18-inch alloy wheels that add a retro touch which could be the reason for its continuing popularity.

The diamond stitched design patterns on leather seats give a premium look and feel to the interior of the Volkswagen Beetle. The seats are also elaborately contoured for that perfect fit and superior convenience and comfort even on curves. Some new interventions include an upgraded multi-function steering with controls that provide access to various options. More interesting accents include the Käferfach heritage inspired glove box storage that was once a crowning glory of premium models in the Bug-era vehicles. Such classic design inserts can be seen on various other places inside the Beetle’s cabin, such as the dashboard display gauges that incorporate retro styling with modern digital display insets. Another major reason for the continuing popularity of the Beetles is the addition of ultra-modern features such as the ambient interior lighting that’s customizable with colors to suit your mood.

The Volkswagen Beetle’s feature some delightful infotainment options with the sensational 400 watts Fender audio system. You get some amazing voice options using Bluetooth with audio streaming that pairs with compatible devices so you can make calls without losing focus on the drive.

The 174-hp 2.0L TSI turbocharged engine on the Volkswagen Beetle evokes a 184 lb-ft of torque on demand that makes it an agile performer. The superb mileage of 26mpg City and 33mpg Hwy as per EPA estimates adds to its popularity. Ontario Volkswagen dealer demonstrated the nifty features such as keyless entry, blind spot monitor and a range of controls through the VW Car Net App much to our delight.