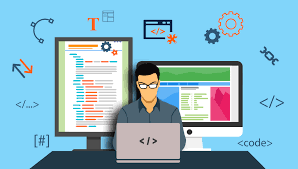 Why Should I Become A Web Developer?       As we all know that the digital world is growing rapidly with time and there are bulk exchanges of web design and development services. The field of information technology is more than what actually it seems. In the crowd of millions, there are several people who get confused with regard to web development. Is web development a good career option? What if I stuck in somewhere middle during my web developer job? Will I get a smart salary? Will the web developer job prove to be a burden? – These are some of the questions raised by the people during a survey. To give an answer to all these questions, I have elucidated essential facts proving the web developer job as a right and secure career option.

Things Which Web Developers Do    Usually, a web developer builds websites or any web-based app. Web developers have good knowledge of coding. Their work is little more complicated and unique than web designing. Web developers can make animated websites or any app that store information etc. It is not really necessary to have a first class degree to become a web developer. All that you need is knowledge in any one field of languages like Python, JavaScript, Java, PHP etc. Web developers usually create an impressive resume which highlights their key skills. They show this resume in the interview to fetch the job. Key Features of This Profession This job is dynamic, creative and innovative. The web developers need to create the long-lasting user experience and eye-catching websites. Actually, in the beginning, it is tough to build a website. But as the time passes, the task becomes simple and painless. Another important aspect of becoming a web developer is that you will become a part of a community. Web developers work in a team and they have many online groups which facilitate them in growing faster. Web developers can switch themselves into other related areas. Nowadays, the demand for the mobile application developer is growing and with the increase in demand, many web developers are moving towards this better opportunity. Web Developers on Monetary Terms The fastest growing field, information technology has loads of jobs for creative and innovative minds in today’s date. Web developers are in huge demand and so even their salaries have no bar. There are unlimited companies who are ready to offer top-rated salaries to the web developers. Besides this, the countries which are offering the highest salaries to web developers are U.S. and Australia. The highest paying states in the U.S. for web developers are New York, Washington, California, Virginia etc. There are lots of opportunities and looking at the current scenario, the future of a web developer is secured and productive. If you start your career with a small company then most probably you will have more duties and your income will be little less. However, the job of a web developer is creative and it demands teamwork. This profession is very thrilling and it has an endless scope]]>