The only way from the Caucasus, or rather from Georgia, to get to Iran by land is to pass through Armenia. It was originally intended that my trip to this country would be an important but time-limited step (1-2 weeks) to obtain such a valuable entry visa to ancient Persia at the Iranian embassy in Yerevan.

7 top places to visit in Armenia

Mount Ararat is an important symbol and pride of every Armenian. The view of the snow-capped Mount Ararat from Yerevan is impressive and breathtaking. The name “Ararat” actually means two volcanic cones. It is easy to see why the greatness of this volcano (Practical information: last eruption of a stratovolcano: July 2, 1840), which at its highest point reaches 5137 meters (3896 meters on the second cone), is a symbol of Armenian identity and ancient culture. In Christianity, according to the Bible, Noah’s ark completed its journey after the flood on the slopes of this mountain. Several international expeditions organized to find evidence of this belief have failed to solve this mystery, which still remains unsolved! 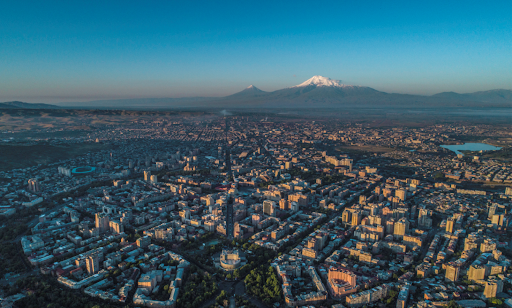 Yerevan, the heart of Armenia.

The capital of Armenia is home to more than half of its population – 2,500,000 people. Proud of its past, dating back more than a few millennia ago, this city, located at an altitude of 1000 meters, unites the entire economic and political life of Armenia. Destroyed and then rebuilt many times since its foundation, Yerevan and its urban style are reminiscent of many cities in the republics of the former USSR. Although it was nicknamed “The Pink City” due to the color of the materials from which the buildings are built, the buildings themselves are massive and not distinguished by sophistication, giving the impression of power and strength.

On the other hand, the city is dominated by numerous benches in public places, wide sidewalks and countless flower beds, making walks pleasant and peaceful. During such trips, it is easy to find a place to relax on the terrace and enjoy a good cup of coffee. (My favorite with excellent coffee “In Vino” Saryan street 6, +/- € 1 and an incredible selection of wines by glass at very reasonable prices; a warm welcome from the staff and owner guarantees a pleasant stay).

Transport and city travel: what to do in Yerevan?

The best way to explore the city and its attractions is on foot. The metro has only one line – from north to south, which makes it not very convenient for traveling around the city. On the other hand, numerous mini-buses run in Yerevan, chaotic and but with a wide route, as well as municipal cheap buses, often old ruins, which China gives to Armenia for free in the name of “soft control”, but they really do not inspire confidence. Also popular is car rental in Yerevan.  But beware: Yerevan is surrounded by 7 “hills” (apart from the south and the plain to the border with Turkey), which pose challenges for less experienced cyclists. Moreover, motorists (and minibus drivers) find it difficult to share “their privilege” with the kings of asphalt. I quickly decided that in order to minimize the danger of movement, the best time for cycling was in the early morning, when the traffic in the city was not yet so active. The best recommendation for city cycling is to ride on sidewalks, not on a roadway cluttered with vehicles and drivers who don’t notice cyclists! (Sharing the road with different vehicles is not used here yet)

On the other hand, and unlike, for example, Georgian drivers, respect for pedestrian crossings by motorists is systematic. There are almost no motorcycles or scooters on the streets, except sometimes for an old sidecar or a model of a Brezhnev era motorcycle!

Where to sleep and eat in Yerevan?

There are few hotels in Yerevan and, apart from two or three, they are all expensive and overly pretentious. I advise you to turn to rental services for apartments and apartments (AirBnB and Booking.com), especially since the choice is numerous and, in general, of good quality. (Practical information: from 15 to 30 euros per day for an apartment +/- 40 m2, renovated, in the city center)

The restaurants are inexpensive and offer fresh dishes, mostly cooked on site, and often in front of your eyes. Main dishes made with meat or fish and always seasoned with herbs or spices are grilled kebabs (Horovadz), thin pizza (Lahmajo), potato soup and beef (Khashlama), and pumpkin stew (Khapama). Desserts (baklava, chureg, gata and other kadaifs) will delight sweet lovers.

For freelancers who are accustomed to moving and living in different parts of the world often, Yerevan probably won’t be the first choice: winter (October to April) is frosty (can drop as low as -15C), and summer (June to September) is usually very hot with weeks over + 40C on average. There are no specific cafes and establishments that the digital community can comfortably spend a day at work in (August 2020). However, all cafes and restaurants (as well as hotels) offer free Wi-Fi and are generally of good quality.