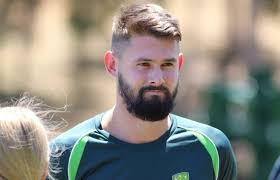 Australia pacer Kane Richardson reveals why he did not put his name for IPL 2018 Australian quick pace bowler Kane Richardson impressed with his form at Big Bash League in 2017. The 27-year old quick pacer from Australia took 12 wickets in 10 matches at an average of 26.16 for Melbourne Renegades and also kept a decent economy of 8.05, considering he bowls in powerplay and death overs. The tall seamer, He was bought by Pune Warriors India in 2013 and got three games in which he took two wickets at an economy of 8.53. Next season, in 2014, he moved northwards to Rajasthan royal and in seven T20s, took nine wickets at 22.88 with an economy of 7.62. He missed the cash-rich season in 2015 but returned in 2015 with Virat Kohli-led RCB. He impressed with seven wickets in four games but was expensive with an economy of 9.71., .But the seamer decided to not put his name at the auction this year. Explaining his decision to sit out of T20s most lucrative tournament, the right-hand bowler said that he is focusing on making his entry in Test cricket for Australia. “It’s a hard decision because of the financial rewards. Not a lot of guys do it. I’ve put in a little bit more of a goal to play more Shield cricket and I thought if I play upwards of seven Shield games, the body is going to need a fair bit of a rest,” he told Cricket Australia. Richardson further added thatI’m still only 27 next, so hopefully, I can get over there a few more times. “I experienced it (the IPL) as a young bloke and made a little bit of money over there so that makes it easier having had that happen. I’m still only 27 next so hopefully I can get over there a few more times,” he said. The bowler had another reason on his mind for his decision. “I am actually getting married in April. A bit of pressure to stay at home this year,” Richardson added. The Australian bowler, who has played 15 ODIs and 5 T20Is for his country, had a decent outing at Sheffield Shield in 2017 summer, in which he claimed 32 wickets at an average of 26. Speaking on his prospect of making a Test debut, Richardson said, “I’m still a long way away from playing Test cricket but it’s still a goal to play. Whether or not (missing) the IPL helps that, I’m not sure. I’m pretty big on giving the body a rest and building back up through the preseason in Adelaide and hopefully playing more cricket throughout our home summer,” he said. Richardson played a part in the first T20I for Australia in the ongoing tri-series against New Zealand and England. In both the matches, he bowled 4 overs. He recorded figures of 28/0 against New Zealand and 27/1 against Australia. He is likely to feature once again in the third T20I against England which will be played on Saturday.]]>