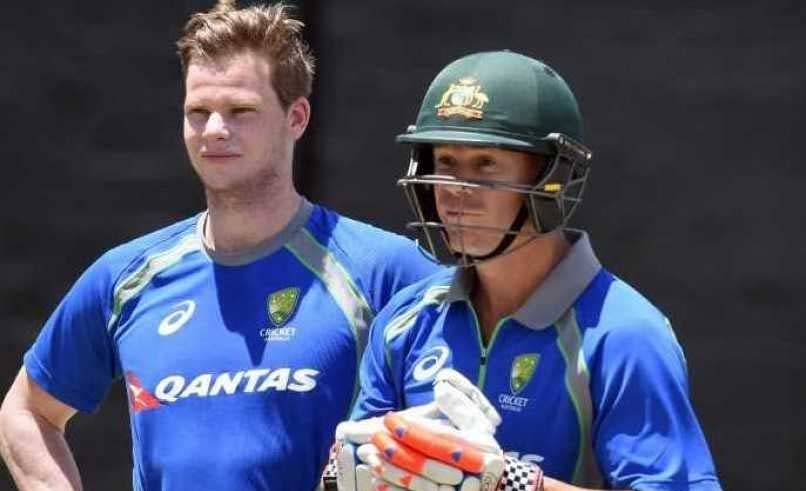 Ball tampering scandal:Steve Smith, David Warner Face One-Year Bans With Coach Darren Lehmann Set To Resign: Media Report   Ball tampering scandal: if reports in the English media are to be believed the 28-year-old could be stripped of the Australian captaincy permanently. Also in the dock is  steve Smith’s deputy David Warner. Reports suggest that both Smith and Warner are facing one-year bans with coach Darren Lehmann set to resign with immediate effect as cricket chiefs hold crisis talks in South Africa to deal with an escalating cheating scandal. Smith has already been suspended for one Test and docked his entire match fee by the International Cricket Council (ICC) for his role in a plot that saw teammate Cameron Bancroft tamper with the ball during the third Test against South Africa in Newlands, Cape Town on Saturday. A word from Australia’s current opponents: South Africa’s coach Ottis Gibson has had his say on the tourists’ “win at all costs” mentality. “The Aussies have said it themselves, the brand of cricket they play is win-at-all-costs,” Gibson said on Tuesday, wondering whether the relative ease of Australia’s Ashes win might have played a part. “When you look at the Ashes, they were never really behind in any of the games, they won quite comfortably. Here they have been behind a couple of times and perhaps that desperation came into it. It’s a shame that something like this had to happen for them to have to have a look at themselves. “Every team, since the beginning of reverse swing, tries to get the ball to reverse. They skim it in, they bounce it in, they try and get it rough. The spinner gets his hand in the dirt and rubs it on the ball. Everybody has got a way of getting the ball to go a little bit further. The ball will reverse naturally, but everybody has a way of getting it to go a little bit further. Perhaps the desperation that they were behind in the game meant they took it that step further. It’s unfortunate.” Gibson expressed surprise at how big the story has become globally, but believes this is because of the spectacular fall-from-grace for a side that has been such a power in the game. “When you see such a deliberate act, then people will become very interested in it,” he said. “Especially with what Steve Smith said, that it was planned by a few of them, makes it an even bigger topic for people to talk about. “Cricket Australia is a hundred-year-old organisation and they have been the envy of the world in terms of winning World Cup and so on. They have had great teams and great players for a long time. Those great players from the past will now feel like their good name has been tarnished a bit, so people have a right to be upset about it.” Though even the most cricket-obsessed of us might have been surprised at it leading the BBC’s 10 o’clock news the other night According to the Guardian reports , australian coach  Lehmann, who was said by Smith to have no knowledge of the plan, will resign on Tuesday. Cricket Australia (CA) boss James Sutherland, under mounting pressure to come down hard on what Australian media has dubbed a “rotten” team culture, was due in Johannesburg Tuesday where he will meet up with CA’s head of integrity, Iain Roy. They are expected to update a shocked Australian public on Wednesday morning, with reports saying they could throw the book at Smith and Warner by banning both for 12 months and sending them home in disgrace. Lehmann took over the coaching reins in 2013 when predecessor Mickey Arthur was sacked, with Justin Langer considered a front-runner as his replacement although Ricky Ponting will also be in the mix. “We are aiming to be in a position to fully update the Australian public on the investigation and outcomes on Wednesday morning,” Sutherland said in an email to cricket fans. “We understand the strong interest everyone has in this situation and we are following due process to properly address all of the relevant issues involved.” Meanwhile, Smith stepped down as captain of the Rajasthan Royals with India batsman Ajinkya Rahane taking over. Zubin Bharucha, a Rajasthan official said, “The incident in Cape Town has certainly disturbed the cricketing world. We have been in constant touch with the BCCI and taken their counsel. Furthermore, we have been in regular contact with Steve.” “It’s in the best interest of the Rajasthan Royals that he steps down as Captain so the team can get ready for the start of the IPL without the ongoing distractions.

Smith was a part of the Rajasthan Royals in 2014 and 2015 and was the only player retained by the franchise in 2018. The Australian skipper had led the Rising Pune Supergiant to the final of the IPL in 2017, where they lost to eventual champions Mumbai Indians.]]>