If you want to build your electronics projects, you should have a handful of tools and materials within reach. So that this is not too expensive or you even buy the wrong, “c’t Hardware Hacks” has put together some tips for the right accessories. 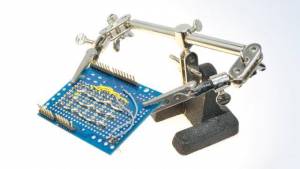 In your first attempts at soldering, you will quickly realize that you have at least one hand too little: one hand holds the soldering iron, the second leads the solder and the object to be soldered slips on the table.

The board and components can be fixed in various ways. For 3 to 20 dollars, you get a ” third hand,” an adjustable holder with base and two or three crocodile clips. The clamps hold the board during soldering. Often, a magnifying glass is attached, which bothers in practice but because of their low magnification rather than help. A “third hand” is very well suited for small boards and soldering plugs to cables. For blanks whose edges are longer than about 10 centimeters, however, the whole structure is unstable.

Here you better access the board holder or mounting frame, in which the board is clamped like in a vise. To get to both sides, you can rotate the fixed board by 180 degrees. Better versions have an adjustable cushioned arm that holds the components in place when reversing the board for soldering — cost: 15 to 80 dollars.

The Zero-dollars alternative to these brackets is a piece of anti-static foam on which the board is placed upside down.

If you do not have your workbench and solder on the kitchen or desk, it is also a good idea to use a board as a base to prevent damage to the table caused by falling welding. You only have to fear burn marks if you place the soldering iron directly on the surface, but already the hot drops of tin can leave traces in the coating. 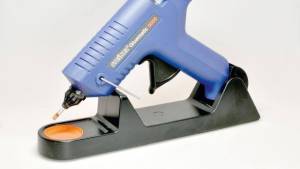 Drilling, polishing, milling, deburring, engraving, sawing – this is the usual enumeration of the cutting processes of a multi-function tool, colloquially referred to as Dremel. Strictly speaking, this means only the devices of the American manufacturer of the same name, the numerous replicas are known as “Feinbohrschleifer” or “mini-drill.” When crafting, you can replace multiple devices and tools, no matter whether you need to drill boards, milled housings, or cut screws.

A hot glue gun should not be missing in the toolbox because of the excellent price/performance ratio: It only costs a few dollars and sticks everything. A adequately positioned drop of hot glue solves attachment problems and gives even the wildest constructions a bit more stability. 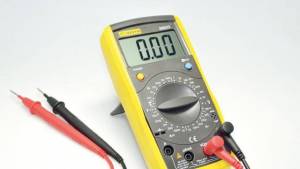 In classroom lessons, rotary-pulse instruments with hands and scales are often used, while digital meters are now standard in the handy multimeters for home use. All devices from about 10 dollars are safe for most situations in electronics tinkering.

As multimeters, the instruments are called because they combine several measuring instruments: voltmeter, ammeter, ohmmeter and a continuity tester, with which one can test connections and diodes, which are the usual minimum equipment.

You should, therefore, choose your multimeter not only for the price but also for the desired additional functions: transistor test, connection for the temperature sensor, frequency measurement, or capacitance measurement of capacitors.

A question of taste is still whether the multimeter has an auto-range function or not. Auto range means that the device itself determines at the beginning of the measurement whether, for example, in voltmeter operation, a very high or very low voltage is measured. In the case of devices without an auto range, you must set the measuring range yourself before the measurement, that is, you already know roughly in which order the result will be.

The advantage of the Auto range devices is that they avoid errors due to incorrect settings on the multimeter, which can be helpful, especially for beginners. The disadvantage is that the Auto range function often takes a little longer to show the measurement result. This can slow down the work, especially if you often measure many values ​​in a row.

Primarily cheaper multimeters are often delivered only with a set of measuring tips that you have to hold for measurement at two points of a circuit. However, both hands are occupied. Help with measuring leads with terminal tips or crocodile clips, which you can either buy or build yourself very quickly. 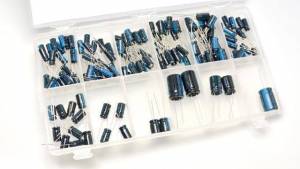 The tinkering comes to a halt and is expensive if you have to order each component on the Internet. It, therefore, makes sense to create at least a small supply of parts. There are assortment boxes with standard resistor and capacitor values ​​and often used diodes and transistors. For superstructures on boards, you should also have a handful of light-emitting diodes, pushbuttons and potentiometers.

Many Arduino starter sets contain a foundation of components other than the microcontroller board, which is sufficient for many circuits and can be expanded later as needed.

If you solder plugs to cables more often, you need shrink tubing. These plastic tubes are available in many diameters. When heated, they shrink and protect contacts from short circuits. Elegant and properly used to heat a hot air gun. Anyone who shuns the purchase or only occasionally wants to shrink hose takes a lighter or the soldering iron itself.

Also never wrong: A pack of cable ties and a roll of fabric tape. There is no mounting problem that cannot be solved with either product. 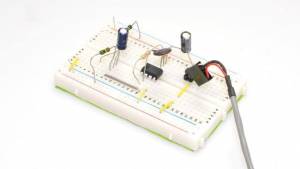 To quickly build your circuit, it is best to use a breadboard, alternatively as a breadboard or breadboard and referred to in English as a breadboard or protoboard. No matter what you call it, the principle is always the same: Electronic components are connected in a conductive manner by sticking their wires into adjacent holes of the plastic plate. Contact springs inside connect the holes line by line. The contacts are one-tenth of an inch (2.54 mm) apart. In the same grid, the legs of ICs in DIP housings are created.

Boards are available in various sizes from a few square centimeters to about A4; the larger boards usually consist of several smaller modules hung together. For wiring enough simple wires with about 0.5mm diameter, which you can cut or ready-made ready to buy. In daily work, the flexible connection cables with contact pins on both ends (e.g., 3.50 dollars for 65 units at Pollin) are more comfortable than the rigid wire bridges.

To supply their circuits with electricity, there are various manufacturers of small voltage converter boards. They are placed directly on one end of the board and convert the 9 volts of a conventional power supply in 3.3 or 5 volts. With small structures, this saves the purchase of a laboratory power supply. If you build larger or more power-hungry circuits, but you should invest in a corresponding device (from 50 dollars).

Not all electronic components can be used on boards. That’s not the only reason why you should always have a set of crocodile clip connection leads nearby. A pack of ten costs only a few dollars and helps tremendously with experiments in making quick connections. 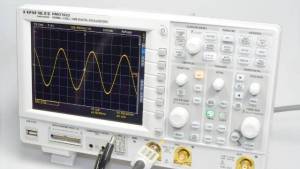 Oscilloscopes have become cheaper in recent years: A new digital storage oscilloscope (DSO) gets you from 250 dollars. But here, you should pay close attention to whether the performance data meet the intended purpose at all. For most private electronics crafting but they are usually sufficient. You can check the best oscilloscope for the money before buying your desired oscilloscope.

You have to look very carefully at the sample rate, which shows how many readings per second the device can record. With cheap oscilloscopes, there is often a high equivalency value that can be achieved by measuring tricks; the actual sampling rate is usually much lower. One should also know that the sensible with a DSO measurable frequency is one-tenth of the sampling rate. A second device with a speed of 250 MS / s is barely usable above 25 MHz.

The memory depth, which is the number of readings that the oscilloscope can store before it overwrites memory, should also be better expressed in the mega-kilo range.

As an alternative to the cheap digital device, you get on eBay from about 50 dollars an excellent used Analog oscilloscope. Here, however, you have to do without most of the digital amenities, such as the export of measurements, automatic signal recognition and mathematical analysis functions.

For the very tight budget, there are portable mini-oscilloscopes such as DSO Nano and DSO Quad (from 70 dollars), kits from JYE Tech (from 35 dollars) or the Xprotolab (from 43 dollars), which can be set directly on boards and also serves as a logic analyzer.

Anyone who often wants to measure digital signals, for example, microcontrollers, should have a logic analyzer. They are available with a variety of functions as tabletop devices, as part of oscilloscopes and as additional PC hardware. Here is a look at the tools that hardware hackers have built themselves: The Bus Pirate (25 dollars) not only records digital signals but speaks most serial communication protocols. 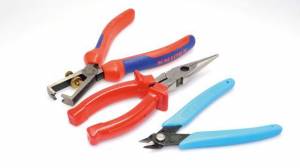 The most important companion of the soldering iron is an excellent electronic side cutter. With these pliers, you snip off the protruding legs of the soldered components. Even when cutting wires and cables, you can not do without side cutters. It should not be the cheapest model: The thick side cutters and combination pliers from hardware stores and toolsets are not only too big but often dull and crush the wire rather than that they cut it clean. The side of the blade facing the cutting off of the board should be as flat as possible to cut off the wire as smoothly as possible.

A pair of needle-nose pliers should also always be part of the equipment: You hold components with them, loosen connectors from boards, straighten bent objects and fish lost parts from housings. They are available in different thicknesses and price ranges, with straight or curved jaws. When buying one should opt for a model that closes clean and does not rattle, there are no more extensive requirements for private use.

If you often process wires or strands from the roll, you should also invest in a good wire stripper. The plastic coating of cables can be removed much faster and tidier than with the usual improvised methods such as with the utility knife, the fingernails, or even with the teeth. It’s just not fun in the long run to sever the wire entirely on the first attempt or to have plastic remnants in the mouth. However, a craft knife has quite other legitimate purposes and should not be missed in the toolbox anyway.

Anyone who has ever ruined a screw with a cheap screwdriver may already know that it pays off to spend a little more on useful tools. The infamous “mini screwdriver set” for two dollars you should only buy in an emergency and for single-use, just as long as he holds. From about 25 dollars, you get sets with fine screwdrivers, which work reliably, even after years.

A venire caliper helps to measure housings, components and boreholes precisely. Who relies on the eye or an office line, will curse more often than it would be necessary. Calipers (or calipers) are available from around 15 dollars with digital displays. They are not necessarily more accurate than their analog counterparts, but easier to read.

Psychometric Tests, test that assesses the skills and the nature