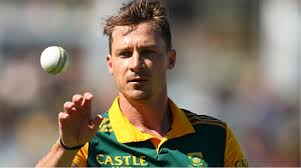 <![CDATA[]]>
<![CDATA[]]>
Home Sports Dale Steyn says he is hoping to be up and running in the next six weeks after recovering from the muscle tear

South African pacer Dale Steyn says he is hoping to be up and running in the next six weeks after recovering from the muscle tear in his left heel which has ruled him out of the ongoing Test series against India.   South African pacer Dale Steyn says he is hoping to be up and running in the next six weeks after recovering from the muscle tear in his left heel which has ruled him out of the ongoing Test series against India. “I’m on the crutches because I’ve got a no bearing weight on the leg for a while, at least two weeks, which makes it seem worse than it actually is,” Steyn said. “But it’s right underneath the heel, so it’s extremely sore to stand on or step on. And as you know, as fast bowlers we land on that front foot pretty often. So I’m going to have to give it time to recover – six weeks, and I’ll be up and running again,” he said. The 34-year-old was, ironically, making a comeback from an injury-forced sabbatical in the ongoing series but it was cut short on the second day of the opening Test when he landed awkwardly while bowling. South Africa won the match by 72 runs on Monday. Speaking of his injury, Steyn said he isn’t too bogged down by it given that he has gone through worse in his career. The pacer said he is hoping to be fit for the home Test series against Australia in March-April. “Yeah, that (getting ready for the Australia series) is the plan. Next two weeks, nothing on my feet. Stay off my feet. After that, I’ll start walking around, and in about four weeks, I’ll start running and then look to start practicing again in six weeks. “That’s a long time. I spent a whole year out, so when someone says to me six weeks, it doesn’t sound too bad,” he said with a laugh,” he said. Steyn said a shoulder injury would have been a bigger blow to him. “But this is a cricket injury, it’s like a batter getting hit on the hand and breaking a finger. So I’m okay with that, just got to put it away and get on with the job,” he said. He walked haltingly but stood resolutely. One of the most memorable moments of the Test was an injured Steyn limping out to bat during his team’s second innings despite being ruled out of the series already. The 34-year-old pacer’s comeback from injury in the ongoing rubber had been ruined by another injury but he was unwilling to let go of any chance to be a part of the action. “… I figured, at that point, we probably needed another 20 runs just to feel a little bit more safe. I figured, if I go out there, I could block,” Steyn, who would be using crutches for the next few days to avoid putting any pressure on his injured left heel, said. He had drawn a massive applause from spectators for each of his blocks during the five-minute unbeaten stay at the crease which ended when A B de Villiers’ all-important wicket became the last to fall for the hosts. “It was not that bad but there was no running involved. It’s not quite a Graeme Smith walking out with a broken hand moment, but I’ll claim it anyway,” the fiery speedster laughed recalling the iconic vigil by Smith against Australia in 2009. Smith, the then South African captain, had walked out to bat at No.11, hoping to survive 8.2 overs against the Aussies despite being injected with his own blood to mend a broken right hand. He could not stop an Australian win but found all-round admiration for his tenacity. Steyn had injured himself on the second day of the match, which the home team won by 72 runs, when he landed awkwardly after delivering a ball. But he refused to stay in the dugout when the Proteas found themselves in a spot of bother at 130/9 in the second innings. Skipper Faf du Plessis later said that Steyn had padded up to bat even before the matter could be discussed with him. “We said if by any chance AB is still there, Dale can just go and just stand there and hopefully AB can smash a few sixes. The plan wasn’t to get him to bat and injure him more,” du Plessis said after the game,” du Plessis said. Steyn is expected to recover in six weeks’ time. “Luckily it’s not his shoulder again. The foot, or injury that he has, is something you probably can get over a lot quicker and we are looking forward to bringing him back in the fold when he’s fit again,” du Plessis said. Dale Steyn’s injury was probably the only bit of bad news for the home team as they halted India with a big 72-run win in the 1st Test at Newlands, Cape Town, on Monday. An injury to his left heel while bowling, which had stopped him mid-over, wasn’t enough to stop him from coming in to bat at No. 11 when his side looked in a fair amount of trouble in their second innings. One of the moments of the Test was Steyn limping out to bat, as he made an attempt to add to the rather modest-looking South African total.]]>