Bitcoin is digital gold. Users all over the world and without the intervention of centralized authorities make fast, safe, and cheap transactions. And the traders earn on this asset. However, making a profit in the cryptocurrency market depends on an understanding of price formation mechanisms. At first glance, simple concepts, such as Bitcoin bid-ask, and spread, play an important role in the trading strategy, as well as in assessing trends and risks. In this article, we will discuss the importance of measuring liquidity, as well as how to measure the liquidity of Bitcoin and what does volatility have to do with it.

Are you ready to find out why Bitcoin remains at its peak?

Liquidity is a key parameter of Bitcoin

To understand whether an asset is liquid, it is worth analyzing how much it is easy to exchange it for fiat and operate it without affecting its rate. This parameter includes two aspects: simplicity (required speed and effort) and price (slippage or the difference between the expected and executed price in a large order). If the asset is liquid, then the trader can make transactions quickly and with minimal cost.

Liquidity plays an important role in financial markets, because the more liquid the market, the more stable it is. When buying or selling Bitcoin, there are always traders who are ready to execute an order with minimal impact on the asset price. But a less liquid, more obscure altcoin will probably affect its price as a result of a major transaction.

To complete a major transaction, most likely you have to go through the order book, ultimately increasing the spread of supply and demand, as well as raising or lowering the total asset price. In this scenario, not only the trader experiences strong slippage, but the asset volatility increases. Thus, a more liquid asset is more stable both in individual transactions and in the market as a whole.

It`s interesting that Bitcoin was the most stable asset during the global financial crisis, which was observed in this spring. Earlier, the Bitcoin exchange rate didn`t correlate with other assets, but in recent months it has shown a strong correlation with stocks and other traditional assets.

JPMorgan analysts argue that during difficult situations in the world, the crypto environment proved to be quite stable, liquidity on large crypto exchanges preserved, unlike traditional markets.

Of course, bitcoin’s liquidity dipped during the peak fall of the market but recovered much faster than liquidity in traditional markets. According to experts, the Bitcoin market depth is already above the average for the year, while the liquidity of more traditional assets hasn`t recovered yet.

Thus, we can congratulate us, – we passed the stress test!

Is Bitcoin an unstable asset?

The main cryptocurrency is constantly changing its rate, so many are sure that this is the volatility. But in reality, everything works differently.

We want to note that volatility is everywhere – financial markets, the political arena, and even your relationship with your neighbors. In fact, sharp and unpredictable changes in scenarios can be considered volatility. But often, these changes have negative consequences.

Volatility is the antithesis of stability. It scares and attracts at the same time. Investors don’t like volatility until a sharp jump in the asset price makes them richer several times, and traders enjoy it, but until the risk doesn`t have to pay too high a price.

However, there is a misconception that low liquidity leads to high volatility. On the one hand, it`s logical, but not exactly. Studies have shown that high volatility leads to low liquidity, and not vice versa. Market participants try to compensate for risks from fluctuations by keeping an unstable asset in their possession (we don`t sell assets under any circumstances in the hope that the situation will equalize and the rate will rise).

Due to the high volatility, Bitcoin is considered a high-risk asset. But Bitcoin is a unique asset, and in order to better understand the cryptocurrency market, you need to understand a few points.

How to determine the volatility

Volatility can be divided into several types, one of which is considered to be a jump-diffusion model. Usually, this model is implied when it comes to financial instability. Sharp leaps are usually considered an indicator for analyzing the cryptocurrency market.

You are often sure that the large volumes will appear the high liquidity, which can pacify the high Bitcoin volatility and make it more stable. But diffuse volatility has other plans for this.

To make forecasts and collect statistics on fluctuations, the calculation of standard deviation is most often used. For example, when analyzing the Bitcoin volatility for a certain period, it is noted that the asset rate was between $ 9,000 and $ 11,000. At the same time, absolutely all values from $ 9000 to $ 11,000 are taken, including the most extreme points.

You can guess that this calculation method exaggerates the role of sharp ups and downs, which don`t happen so often. For example, a major player entered the market, and high orders triggered, as a result, the cost of bitcoin increased by 20%, and then returned to fluctuations of ± 5%. Of course, this will affect the volatility analysis, but the price stayed at this level for only a couple of minutes, because apart from the whale, no one else bought at this price.

However, with the Bitcoin popularity and liquidity growth, the likelihood of such sudden jumps decreases, because more and more orders for large amounts appear on the market, and it is much more difficult to break them alone.

Interestingly, the Bitcoin volatility hasn`t changed much over the past 7 years, although millions of new players have appeared on the market, and the BTC price and liquidity have increased by tens of thousands of percent. 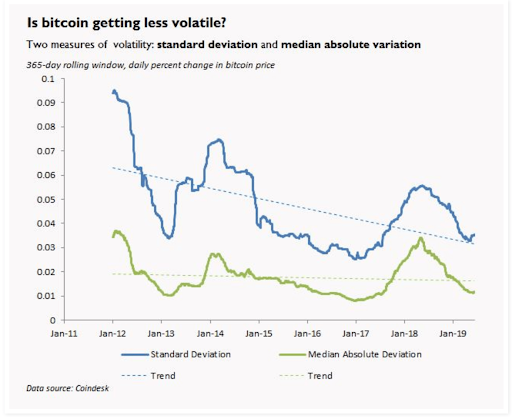 In general, only the number of one-time jumps has decreased. But what is the reason? The fact is the fundamental Bitcoin value.

The true value of Bitcoin

Bitcoin can be considered a real asset since it doesn`t depend on the price of others. It can`t be called either a stock or a bond, but there is an opportunity to draw parallels with real estate or even natural resources. It is also impossible to estimate the flow of income from Bitcoin, since no reports on incoming and outgoing financial injections are received, and it`s impossible to calculate at least an approximate profitability. Therefore, it is difficult to determine its real value.

So what affects the determination of the Bitcoin price? We and our mood. The cost of Bitcoin will be what we are ready to pay for it.

That is why Bitcoin is called digital gold, because it is impossible to determine the flow of income for gold, and its price is determined by the players’ mood. This precious metal experienced a sharp jump in value in 1980, tripling in price.

However, the volatility of Bitcoin is still much higher. But why is this happening? Of course, technology can still be called new, although it was launched 10 years ago.

At the same time, Bitcoin is shrouded in news, hundreds of materials are written about it every day and this affects the market mood. And the mood is a determining factor in the Bitcoin value. But you need to understand that uncertainty will continue to affect the price of the first digital coin until its final potential and scope are clear. This can`t happen today and it is unlikely to happen tomorrow, so the bitcoin volatility will remain high, even if millions of new players will enter the market and liquidity will grow tenfold.

What will happen to volatility?

Will Bitcoin always be volatile? No, the situation will be as long as the barrier of uncertainty will not be broken. When we answer the questions posed above, the coin will become stable, its fair price can be calculated much easier.

Until then, the price will continue to depend only on market mood.

However, it`s not bad and high volatility can become your trading assistant.

It’s not a secret that amid the development of the crypto industry, more research and new tools for analyzing crypto sentiments and making better forecasts appear, which allows investors to earn more and minimize risks.

On the other hand, high volatility is closely linked to huge incomes. If this were not the case, the world would not have known about bitcoin millionaires, and no one would have made X2 or X10.

We cannot escape from volatility, but maybe this is not necessary? 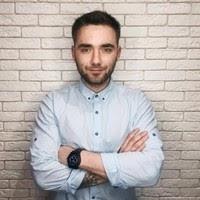