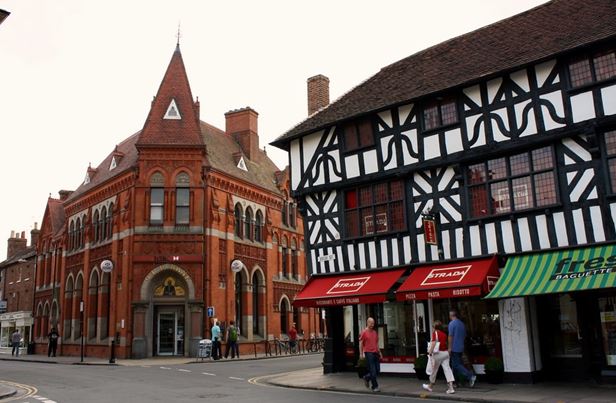 Among all the beautiful places to visit in Britain, what sets Stratford-upon-Avon apart is the fact that it is well-known for being the birthplace of the famous William Shakespeare.

Stratford-upon-Avon is a famous tourist location and is admired for its gorgeous riverside setting, beautiful thriving street market, myriad of houses with bustling history attached to it, famous restaurants, and theatre. The house where Shakespeare was born and the school where he was educated have also become famous spots beloved by all tourists. One of the most photographed places in the area aside from these is Anne Hathaway’s maiden cottage, before her marriage with Shakespeare. Stratford-upon-Avon is famous for its open bus tours where tourists can see all these famous locations and more.

The river of Stratford-upon-Avon makes the place extraordinarily picturesque and allows the tourists beautiful cruise rides that give them a different perspective of the place’s beauty. Aside from the ferry that takes tourists across the river, they can also decide to enjoy a lovely peaceful walk across the river using the many available bridges.

Located around 100 miles northwest of London, Stratford-upon-Avon was established in the 7th century AD when the Saxons invaded Warwickshire. The name came about as a combination of the Celtic word ‘Avon’ and the Saxon word ‘Strat’ Ford. The ‘strat’ ford represented the fact that it was the ford by the Roman road while ‘Avon’ meant water or river. The place started as a typical early AD century village but was later transformed into a town in the 12th century. In the year 1196, it became famous for its weekly markets.

Soon the town was bustling with all kinds of craftsmen ranging from carpenters and blacksmiths to shoemakers and bakers. It also became famous for its malting and brewing industries. The small town of Stratford-upon-Avon had a population of about 1000 to 1500 people. The 13th century saw Stratford-upon-Avon start a small grammar school and the building up of guilds which were small religious communities. Tourism grew in Stratford-upon-Avon around the 19th century as soon as more people started to love Shakespeare and realised that this was his birthplace. The building of the Royal Shakespeare Theatre in 1932 drove in more visitors and tourists which were later refurbished in the year 2006. In today’s day and age, the population of Stratford-upon-Avon stands at a whopping 27,000.

The town has become so famous for its food that it started a yearly food festival in September called the Stratford Town Centre Food Festival. This two-day festival showcases all things food and drink inclusive of detailed demonstrations, a lovely local produce market, hands-on workshops, and much more. There are two sampling sites on these two days, which visitors love to indulge themselves in. Apart from this yearly food extravaganza local food and treats see monthly specialist markets that have food and drink entertainment events. The town also has restaurants that are famous for their handmade bagels stuffed with the best meat, cheese and veggies, and delicious homemade doughnuts.

A Place to Stay at Stratford-upon-Avon

With its rich heritage and the great popularity amongst tourists who visit Britain, Stratford-upon-Avon is a relatively expensive place to visit. Having said that, it provides its visitors with a variety of housing and staying options including hotels, B&B’s as well as self-catering stay spots in different parts of the place. The best part about any of these locations that the tourists can stay at is the fact that they are gorgeous inside and out. Staying at a hotel or B&B doesn’t make the tourist feel out of place as most of them look like the other homes and locations in the town. One can find the best hotel Stratford upon Avon either through their travel agents or online.

When searching online one should make sure to check the ratings and reviews of the best hotel Stratford upon Avon. Checking the pricing to make sure it’s within their budget is also extremely important as some are more expensive than others. One should also check the feedback of those who have stayed at that hotel or B&B recently to see whether or not it is a similar experience to what they are looking for. Once a list of a few hotels or places to stay has been selected, the next step is to ensure that those working at those places of stay have good communication skills and are generally pleasant people. If there are any specifications or alterations that need to be made such as in case of allergies, make sure that the hotel or B&B in question is capable of making such compensations.