Faro is a popular card game played by two or more players. The game is one of the oldest card games and is named after the image of the pharaoh in the French land of playing cards. Like poker, Faro is popular for its dynamic game mode, better odds and easy-to-lea 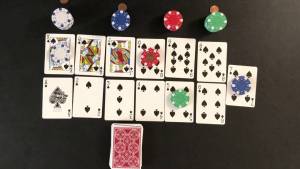 Do you know How to play Faro

How to deal with Faro

How to win at Faro

The aim of the game is to guess the most winning cards in a row. A variety of strategies can be used to maximize your winnings, including playing split bets where the player places chips between cards either vertically, horizontally, or at the corners, which gives the advantage of covering more cards compared to betting on one card. Another strategy is to place bets on the highest card (HC), marked at the top of the faro table, where the value of the winning card is predicted to be greater than that of the losing card.