A Utility to Import PST to Exchange Server Mailbox

Many times it happens that the Global Administrator of the company wants to create a backup of employees’ database and manage the data of employees. This is usually needed in the case when an employee leaves a job. This can be done by trying to import PST to Exchange Server. A user can use a third-party tool like the Exchange Import tool. More details about the software are given in the write-up to easily import Outlook PST to Exchange.

While importing multiple Outlook PST file to Exchange Server, the tool permits the user to migrate complete data from a PST file. Emails along with other data items are exported from Outlook to Exchange Server after a few clicks. Additionally, the metadata property of PST file is maintained after conversion of the file from PST to Exchange Server.

If a user wants to import single or multiple PST files from the local network, then an option of network searching is also available within the same domain. A PST file can be simply added from the workgroup network by browsing it using Add File button. The Exchange PST import tool will list all the machines available on the machine and asks a user to enter credentials.

The software enables a user to get only some selected amount of Outlook PST data. Once the migration tool finds out all the PST file, it will list the complete data of the file. A user can select or deselect the checkbox as per the requirement. Similarly, the desired folders can be moved to the personal folder on MS Exchange Server. In this way, specific PST files will be added to the Exchange.

The import software enables a user to leave out recurring contacts from Microsoft Outlook PST file while exporting data from PST to Exchange Server 2016 or to 2010. This option is of great help when a user is aware that there are duplicate contacts in the PST file. If a user wishes to exclude them, simply click on the option Exclude Duplicate Contacts.

Specification of the Exchange Import Tool 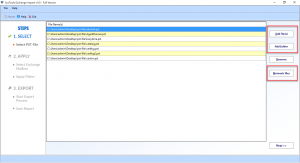 There are two editions of the Exchange importer to import PST to Exchange Server:

Demo Version: In this edition, the working of the application can be experienced without spending money on it. The free or demo edition can be downloaded from the official website of the organization. But, there are shortcomings of the demo version. The trial edition of the Exchange Import Tool 2013 will import first 25 items/folder from the selected Outlook PST file.

Licensed Version: If the users are satisfied with the working of demo edition, they can purchase the full version via a safe investment gateway. No limitations are faced by a user while using the licensed edition of the importer utility.

Pros and Cons of the Exchange Import Tool

Some of the advantages and disadvantages of the utility are mentioned below:

It is desired by many organizations to import PST to Exchange Server 2016 and other below versions. The manual approach for the same also exists. But, in case of a large number of PST files, it becomes a tedious task and it consumes a lot of time. It is when an Exchange Import tool comes into a frame. It offers a complete list of genuine features and the simple graphical interface. Also, the accurate results are generated just after a few seconds. So, I would like to rate this product as 9.8 out of 10.