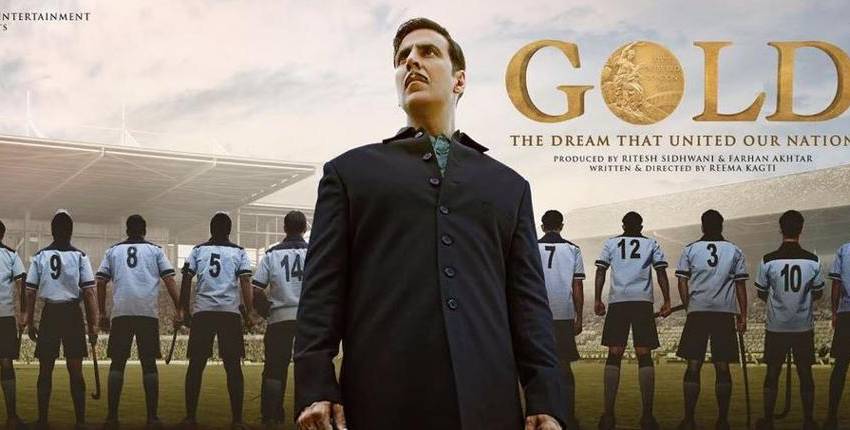 Gold movie trailer has Akshay Kumar leading a team of hockey players pre-independence era makes gold medal for India Gold  movie trailer: After the success of PadMan How do winners become legends? This is just what Akshay Kumar’s Gold, an upcoming film that combines hockey, patriotism and the brand value of Akshay, will explore. , Akshay Kumar is back in his patriotic form as the flag-bearing coach of a pre-independence Indian hockey team .As Gold movie trailer landed on Monday, it seems the actor has another winner on his hands. The over two-minute long trailer features Akshay, Mouni Roy, Vineet Kumar Singh, Amit Sadh, Kunal Kapoor and Sunny Kaushal.   Besides Akshay kumar , Gold has a powerful starcast like Kunal Kapoor, Vineet Kumar Singh, Amit Sadh and Bollywood debutante  Nagin actress Mouni Roy. Inspired by true events, Gold captures India’s first Olympic Games’ win as a free country in hockey The trailer that opens in the pre-independence era, shows how it took 12 years to win a gold for India and the struggle of Akshay’s character along with others to win the medal for the country. , will be seen as a Bengali in the film and the trailer gives a peek into that persona. The film’s scope is an ambitious 12 years — from 1936 to 1948 — in which India gains independence. In these years, Akshay’s Tapan brings together a hockey team that falls apart only to unite again to achieve that dream Talking about the film, producer Ritesh Sidhwani had earlier told PTI, “It is not a biopic. It is a completely fictional story but it is set against a real backdrop between 1933-48 India about what the country was, the sports… about hockey. It is not based on any character.” Akshay Kumar, in an interview to a leading daily, also pointed out a coincidence, “Gold releases on August 15 and on August 12 is the 70th anniversary of India’s first gold medal as a free country at the 1948 Summer Olympic Games in London. The release couldn’t have been planned better. It’s a matter of pride that while we celebrate the 70th anniversary of one of our first biggest victories on foreign soil in hockey, we will also host the Hockey World Cup. As for the sport getting its due, I think this was long overdue.” ]]>