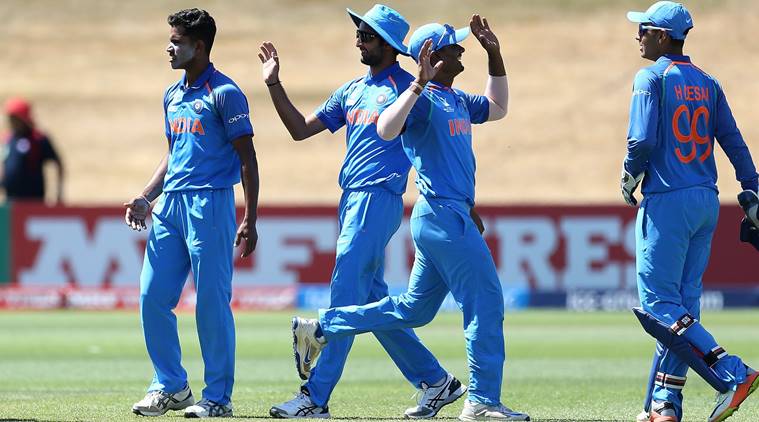 ICC Under-19 World Cup: After IPL hipe , India Face Arch-Rivals Pakistan In under 19 cricket world cup semifinal History always magnifies India versus Pakistan encounters. Statistics become anecdotes, wickets become trophies, and runs cement a player in memory. Player match-ups become narratives, and any past slights, however slight, are resurrected. Head-to heads are flaunted like the result of the match, especially if you are India in World Cups. After bagging lucrative deals at the Indian Premier League (IPL) 2018 auction, an upbeat India will be up for a big challenge when they face arch-rivals Pakistan in the second semifinal of the ICC Under-19 World Cup on Tuesday. Three-time champions India have played four matches in the tournament so far, winning all four matches in emphatic fashion including the quarterfinal against Bangladesh. For two-time winners Pakistan, it has not been smooth sailing in the quadrennial event. They lost their tournament opener to Afghanistan before winning three in a row. For India coach Rahul Dravid, this was yet another reason to look forward to Tuesday’s encounter. “Under-19 cricket is all about experiences, about giving them different learning environments,” he said. “Last couple of years we haven’t had a chance to play Pakistan at any level, so it’s really nice that it has panned out the way it has. Irrespective of the result, at least the guys would get to feel what it is to play an India-Pakistan game. Maybe somewhere along the line they will grow up as men and become cricketers who play for India, and some of the Pakistani boys will play for Pakistan, they would have done it before.” As far as head-to-head records are concerned, both the teams have squared-off against each other on 21 instances and India hold the edge with a 12-8 scoreline in their favour. One match finished in a tie. Each of those encounters led to classic contests and it is worth it to go back in time and take a look at some of those. The last time the two teams faced each other was at the 2014 Under-19 World Cup where an inspired batting performance by Sanju Samson led India to a famous win. Led by skipper Vijay Zol, India won the toss and elected to bat first. Despite losing wickets at regular intervals, Samson’s innings provided the impetus for the men in blue to post a competitive 262/7 in 50 ovs. Deepak Hooda’s five-for helped India restrict Pakistan to 222 and win the match by 40 runs. The atmosphere in Christchurch is anticlimactically sedate though, much like the character of the city. Coupled with the fact that the IPL auction played out over the weekend, the build-up to this game has been low key. The two teams had short, sharp sessions outside Hagley Oval. India’s captain Prithvi Shaw chose not to bat in the nets, but others like Shubman Gill and even the bowlers like Mavi had extended sessions. The match will be played on the same pitch where Australia beat Afghanistan on Monday, so the spinners from both teams will certainly come into the game. India will certainly start as favourites, but Pakistan have a point to prove. Having lost twice to up and coming Afghanistan in the Asia Cup, besides a third time in this tournament, their position among Asian nations is suddenly under a cloud. Nothing like a statement against the biggest fish in the pond to make a dent in history. In 2004, India enjoyed a fine run in the tournament until they were beaten by Pakistan in the semi-finals. This Indian side led by Dinesh Karthik featured some of the future stars – Robin Uthappa, Shikhar Dhawan, Suresh Raina, RP Singh. However, on the day when it mattered the most the men in blue failed to deliver. After electing to bat first India could only manage to put 169 on the board, Uthappa top-scoring with 33. Tariq Mahmood, Fawad Alam made a valuable contribution with the bat to help Pakistan reached the target with five wickets in hand. ndia U19: Prithvi Shaw(c), Manjot Kalra, Shubman Gill, Harvik Desai(w), Riyan Parag, Abhishek Sharma, Kamlesh Nagarkoti, Anukul Sudhakar Roy, Shivam Mavi, Shiva Singh, Ishan Porel, Aryan Juyal, Arshdeep Singh, Pankaj Yadav, Himanshu Rana, Aditya Thakare Pakistan U19: Muhammad Zaid Alam, Rohail Nazir(w), Ammad Alam, Hasan Khan(c), Mohammad Taha, Saad Khan, Muhammad Musa, Shaheen Afridi, Suleman Shafqat, Arshad Iqbal, Imran Shah, Mohammad Ali Khan, Munir Riaz, Ali Zaryab, Muhammad Mohsin Khan]]>