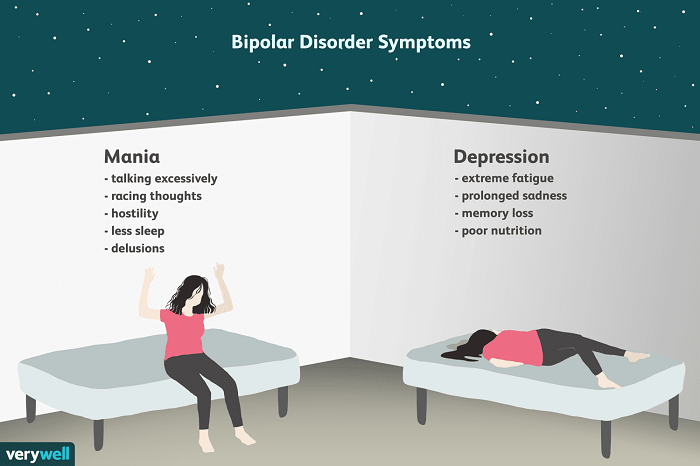 These are the warning signs of bipolar mania:

One of the most noticeable warning signs of bipolar disorder is irritable mood. However, while you have the disorder, you will feel euphoric during your manic phase. At the same time, some talk nonstop, and few develop huge temper as well. The most noticeable thing would be a calm person before now is a person with whom you can live peacefully.

Another common and vital warning sign of bipolar disorder would be endless energy. The person who is suffering from bipolar disorder will have boundless energy and will engage in various tasks. He or she will talk quickly in the manic phase and rush towards the tasks before completing the previous ones. At the same time, that person will be distracted easily as well.

People who are dealing with bipolar disorder will show self-destructive behaviour. It is a very common sign that can be noticed by the victim. Those people will easily take a risk and do harm to them or at least do those sorts of tasks that could harm them, for example, tasks like risky investments, scandalous affairs, or spending binges.

Sleep is very crucial for our body. That is because our body needs rest to heal from daily tasks. But, people who are in depression actually can’t sleep that much. According to many psychologists, people with bipolar disorder don’t feel exhaustion at all. That’s why they can’t or need that much sleep.

These are the warning signs of bipolar depression:

Some of the most common signs of bipolar depression would be moods like sadness, emptiness, and hopelessness. Almost all people with bipolar disorder spend most of their time being depressed with these moods. At the same time, they don’t find anything interesting in life and no pleasure as well.

If you are having trouble with bipolar disorder, you may feel it impossible to do simples. It’s a phase where you feel low energetic and doesn’t find the energy to do simple tasks like getting out of bed. In this stage, you will lose the energy along with the motivation to do things that you suppose to do.

It’s a common sign of bipolar depression that people often find it hard to think clearly. At the same time, it is also common for them that they don’t remember things very much. Besides, they can’t even make decisions for themselves. They lost concentration easily at any work and attention too.

Last but not least are suicidal thoughts. People with bipolar disorder don’t care for themselves and do harmful tasks. At the same time, they also thought of suicides and doing harm to them. It is very common for those who are suffering from bipolar depression.

These are the warning signs of bipolar disorder that are highly noticeable, and one must notice them so that they can get treatment before the situation get worst.