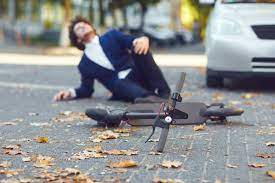 Home Automotive In a Scooter Accident? Here are 4 Things to Do Immediately

The world is going green on a massive scale lately, and you’re doing your part by using an electric scooter to get around. It’s an admirable behavior, and one you don’t expect traumatically.

Yet, statistics show that more than 100,000 riders over the past few years were injured in scooter accidents. If you add in the data for motorized scooters, that number shoots up into the millions.

Why are scooters so dangerous on the road?

Since the bike and rider are so small, they’re less visible to other drivers. And because there’s nothing between them and the concrete but the bike, these crashes have a higher potential injury rate.

If you were in an accident on an electric or motorized scooter, the laws work differently than a typical car crash. To ensure you cover all your legal bases, follow these tips as soon as possible.

1. Get Out of the Way and Call for Help

Unless you’re physically unable to do so, the very first thing you should do is get off the road. Oncoming cars probably won’t see you, and you could end up in an even more perilous situation if your scooter gets hit again.

After you and anyone else involved are safely out of the way, check for injuries. If anyone appears to be seriously hurt or has a neck or back injury, call an ambulance immediately. Don’t try to help them or move them yourself, as this could make the damage worse.

Finally, call the local law enforcement. Whether there’s an injury or not, you’ll all need documentation of the crash in order to file a claim with the insurance company.

2. Get the Other Party’s Info

If the other person is calm and mostly uninjured, exchange your insurance information, address, and phone number.

Until the police get to the scene, you don’t know for sure who will be charged as the at-fault party. It may seem cut and dried, but there are nuances in the laws in each state that determine fault.

Generally, if the vehicle hits you, the scooter rider, because of their negligence, they’ll be at fault. In most states, their car insurance will cover your damage and medical expenses.

However, some states have partial fault and no-fault laws. You may have problems getting your medical bills covered, even if you were not at fault.

It’s a good idea to hire a personal injury lawyer who knows the laws about motorcycle and scooter crashes. The attorney you hire will need the info you collected after the accident.

3. Collect Evidence at the Scene

Many victims of accident crashes assume the fault of the other person is obvious. But when the police get there, the other driver changes their story and claims innocence.

You may have to contest the fault or take the other party’s insurance company to court. In either of those situations, the more evidence you collect at the scene, the better your lawyer can build your case.

As you’re waiting for law enforcement and medical personnel to arrive, take pictures of the scene of the accident. Include shots of every vehicle involved from as many angles as possible.

Talk to the witnesses hanging around and get their contact information. Try to get names, phone numbers, and addresses in case they move in the meantime or change their number.

Look around for obvious CCTV cameras that might have video evidence of the accident. This could be helpful if your case goes to court.

Hiring an attorney after a scooter accident doesn’t mean you’re “sue-happy.” It’s an important step that you need to take to protect your interests.

Because scooters fall under a unique category of law, how the insurance works can get complicated. Different scenarios come into play, such as:

With so many variables standing in the way of your compensation, don’t try to navigate these waters alone. Insurance companies make a living by giving out as little money as possible. To make sure you get the benefits you’re entitled to, including medical expenses, lost wages, and pain and suffering, let a skilled lawyer do the work for you.

Anytime you’re in an accident, it’s a stressful situation. When the crash involves a scooter, the stress often magnifies.

A little machine versus a large car or truck usually means lots of damage. You don’t have to handle the red tape on your own, though. Hire a lawyer you feel comfortable with and let them deal with the stress while you work on recovering from your injuries.