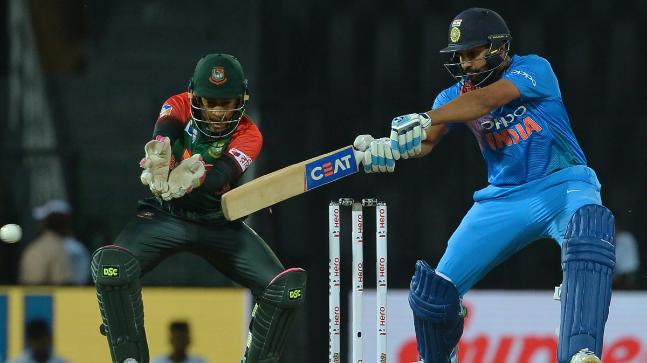 India vs Bangladesh Nidahas Trophy Final 2018 live: Rohit Sharma-Led Team India Start Favourites Against Gutsy Bangladesh Live Cricket Score, Commentary When the Nidahas Trophy 2018 kick-started on March 6, there were reports that the  Nidahas trophy final  of the tournament was already sold out, and that India and Sri Lanka were expected to lock horns in it. India managed to live up to the expected standards, and form one half of the title clash, but an emotionally-charged Bangladesh defied conventional wisdom and usurped the hosts to take the other spot.  Upbeat after a thrilling victory in their last league game against hosts Sri Lanka, Bangladesh will have their tails up as they prepare to take on Rohit Sharma-led Team India in the final of the Nidahas Trophy T20 tri-series at the R Premadasa Stadium on Sunday. While the second-string Indian team recorded a hat trick of comfortable wins after their opening loss to Sri Lanka, Through two fascinating wins over Sri Lanka, Bangladesh have upped their T20 game like never before and now stand on the brink of turning a new chapter in this format for themselves. But they cannot let the events and emotions of their final spot-sealing win over Sri Lanka to repeat itself. Surely not against an opponent they have never beaten in this format. However, an angry Shakib Al Hasan’s attempt to call the team off the ground and allegedly damaging of the dressing room by Bangladeshi players is a testimony that they still have some way to go as far as composure is concerned. Going into Sunday’s final, India with a second-string team minus regular captain Virat Kohli and veteran Mahendra Singh Dhoni, will hope their skipper Rohit will lead from the front and replicate his form in their previous encounter against the same opposition on Wednesday. Rohit struck a brilliant 61-ball 89, his 13th T20 half century and was well supported by veteran left-hander Suresh Raina (47) as India edged past the Bangladeshis by 17 runs to seal their spot in the final. Rohit’s opening partner Shikhar Dhawan has also been amongst the runs during the tournament even as the men-in-blue would hope for some fireworks from the likes of Lokesh Rahul and the middle order comprising Dinesh Karthik and Manish Pandey. Among the bowlers, teenaged off-spinner Washington Sundar has been the find of the tournament with his exploits in the powerplay overs, while leg-spinner Yuzvendra Chahal has supported him well. If India are to restrict the Bangladeshis, the rookie pace department, comprising Mohammed Siraj, Shardul Thakur and all-rounder Vijay Shankar will need to complement the spin duo. On the other hand, bolstered by the return of regular skipper Shakib Al Hasan, Bangladesh will definitely go all out in the summit clash. Their top order comprising Tamim Iqbal, Mushfiqur Rahim, Soumya Sarkar and Mahmudullah have been amongst the runs while Liton Das seems the only weak link at the top. The Bangladeshis will also be wary of Washington Sundar, who ripped through the top order in the previous tie. Bangladesh’s bowling department led by Mustafizur Rahman and Rubel Hossain have troubled the Indians more often than not and will aim to replicate that in the final. Left-spinner Shakib’s inclusion has only added more spice to the contest.  india vs bangladesh nidahas trophy final  2018 Squads: India team for nidahas trophy final 2018: Rohit Sharma (C), Shikhar Dhawan,, Suresh Raina, Dinesh Karthik, Manish Pandey, Jaydev Unadkat, Yuzvendra Chahal, Vijay Shankar, Shardul Thakur, Rishabh Pant, Washington Sundar, Lokesh Rahul, Axar Patel, Deepak Hooda and Mohammed Siraj Bangladesh team for nidahas trophy final 2018: Shakib Al Hasan (C), Mushfiqur Rahim, Tamim Iqbal, Mahmudullah, Rubel Hossain, Sabbir Rahman, Soumya Sarkar, Nazmul Islam, Liton Das, Taskin Ahmed, Mustafizur Rahman, Mehidy Hasan, Imrul Kayes, Ariful Haque, Nurul Hasan, Abu Hider Rony and Abu Jayed    india vs bangladesh nidahas trophy  t20 final  live update: The Bangladesh Cricket Board (BCB) expressed their regret over the team’s behaviour during a Nidahas Trophy match against Sri Lanka on Friday night. The Twenty20 International at the R. Premadasa stadium in Colombo descended into chaos following an umpiring decision and the BCB said that it has warned it’s players and stressed to them the importance of upholding the spirit of the game. Bangladesh did go on to beat Sri Lanka by two wickets and will face India in the final of the tri-nation T20I series on Sunday. “The Board accepts that conduct of the Bangladesh Team in certain instances was unacceptable on a cricket field,” the Bangladesh Cricket Board (BCB) said in a statement. “We understand that the events may have transpired due to the importance of the match and the pressure that comes with it but feel that the expected level of professionalism was not exhibited by the team while dealing with a tense situation.” “The Bangladesh Team members have been reminded of their responsibility in upholding the spirit of cricket at all times,” it added. Drama unfolded when Mustafizur Rahman missed two bouncers from Isuru Udana in the final over and was run out, but the Bangladesh players contested the call, saying it was a no ball due to its height. Skipper Shakib Al Hasan looked furious on the boundary and even waved to call the batsmen back to the pavilion. Reserve player Nurul Hasan, who was sent to the field with a message from the Bangladesh dressing room, was also involved in a spat with Sri Lankan skipper Thisara Perera. The International Cricket Council on Saturday fined both Shakib and Nurul 25 percent of their match incomes and handed them one demerit point each for their part in the fracas. During the Bangladesh players’ celebrations, Sri Lankan batsman Kusal Mendis was seen yelling at them as the Tigers’ Tamim Iqbal tried to calm him down. A glass door was shattered by someone from the Bangladeshi dressing room immediately after the game, sparking further criticism. Bangladesh will face India in the final of the three-nation tournament on Sunday.  india vs bangladesh nidahas trophy  t20 final  after match update:

Karthik: “Really happy to come out of this performance, really happy for the team – young bunch of boys. We have played some good cricket throughout this tournament and had we not won this final, wouldn’t have done justice to the way we have played this tournament. I realised that it wasn’t that easy to bat, the way Mustafizur bowled that over, all I needed to do was to go for boundaries as soon as I went in. Touchwood some of the balls landed in a good place for me to hit a shot. I have been practising this – where I hold a good base and swing through the line well and it came off well today. I have been saying this over and over again; the Indian team right now is a tough place to get an opportunity but once you get it – you got to make best use of the opportunity. Credit to the backroom staff – they have always given me the confidence and I’m happy where I’m.”

Rohit: “Brilliant for the crowd who came out in numbers, on behalf of my team, would want to thank the Sri Lankan crowd for coming out and supporting the way they did. Great tournament for us. Young bunch of lads – lot of learning, we always knew they had lot of talent; it was just about coming here and executing. This tournament win will give them lot of confidence going forward whenever they play for India and wherever they play. Everybody who came and got opportunities stepped in, they showed lot of character and these are high-pressure games and it isn’t easy and we understand that. Quite easy to lead them, played with most of them. Lots of work has been done off the field in terms of planning, strategy and things like that. It was about executing them and they did it perfectly. Batters also stepped up whenever needed. The way we finished off was perfect and very happy to see Dinesh doing what he did. He didn’t get much of game time, the way he came out and showed character was very very crucial for us. That was the reason I held Dinesh back, I have seen him play over the years and his experience matters a lot. When it doesn’t come off, the captain never looks good. Sometimes it works, sometimes it doesn’t. We always had faith when we went into the dressing room after the first innings. The target I wouldn’t say was a very high score or a very low score, it was a par score and with the kind of batting we have, we always had confidence to go and chase the target.”

So how’s your heartbeat now? Mine was racing at the speed of a F1 car. Having written all that needs to be written, there’s one final thing to do before wrapping up. As Harsha Bhogle so rightly tweeted, tonight’s innings should be the second coming of DK. No. 4, 5, 6 or whichever spot in ODIs and T20Is should be stamped and sealed for the foreseeable future. He deserves it for the amount of talent he has. As far as Bangladesh are concerned – they can hold their heads high and try again. Shakib’s hope may and hopefully for their sake should be realised someday. But that’s for later. We are done for now. On that note it has been Srivathsa who has single-handedly – like DK – brought the action from here for everyone out there. I’m off to rest and recuperate from all the madness witnessed at the Premadasa. Do remember to read up everything that has been served up here and will be from Shirshendu and others. Until next time, it’s goodbye from me. Be well and stay safe!