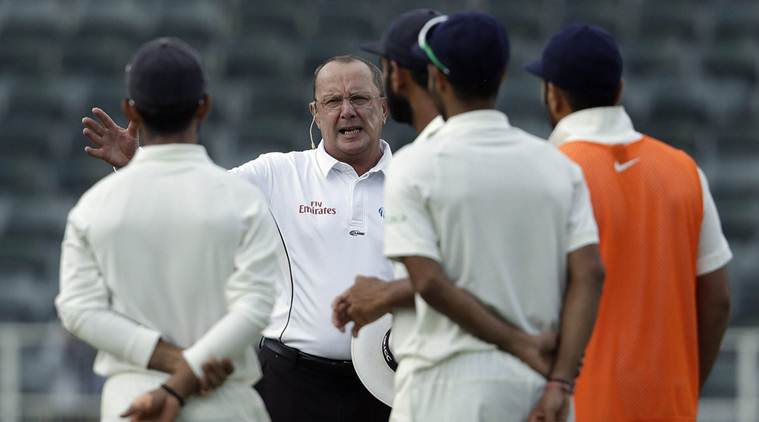 India vs South Africa, 3rd Test: Play stopped after umpires raise concern over pitch match in doubt The Wanderers Stadium is also known as The Bullring because of its design. But what transpired on Day 3 of the Third and final Test at the venue saw it live up to its name as bowlers breathed fire while batsmen struggled and dodged not to get hit by the red cherryAll concerns of the conditions of the pitch aside, the day certainly belonged to the Indians, with special focus on Ajinkya Rahane and Bhuvneshwar Kumar. As dangerous as the pitch was, the Indian batsmen defied all odds (aided with a couple of slip-ups from the South Africans) to go within touching distance of the 250-run mark. India skipper Virat Kohli too deserves praise for scoring nearly a 100 runs from the two innings on a pitch like this where some of the very best would struggle to even adjust to the testing conditions. However, the umpires decided the batsmen have had enough once Elgar cops a nasty hit on his helmet grille, after a series of blows on his body. The fate of the match hangs in balance, but that hardly take any credit away from the Indians, and they thoroughly deserve to win this game, if the powers-that-be decide to give the green signal for play to commence tomorrow. Late into the third day’s play, South Africa opener Dean Elgar was hit on the helmet grill by a rising delivery which prompted the umpires to take the players off the field. Eventually, after discussions between the two on-field umpires, captains of the two teams and the match referee, the stumps were drawn with the pitch being put under covers following a light drizzle. Chasing 241 on a treacherous surface, the hosts had their backs to the wall. The task which seemed hard at first turned even more difficult when Aiden Markram was dismissed by a rising delivery off Shami. However, just as India was getting a stranglehold on the proceedings, play was halted after another delivery scooted off, Elgar failed to negotiate with a short delivery, bowled by Jasprit Bumrah and the ball hit him on the helmet. The South African took off his helmet and immediately team physio was pressed into service. The two umpires held a brief discussion following which the players walked back to the dressing rooms. there were plenty of unplayable deliveries that went past the bat safely or landed safely after hitting the bat. But the Indians did well to counter the seaming deliveries, playing forward and forcing the pacers to change their lengths. Kohli kick-started the morning session dispatching a short delivery through gully for four and when Vernon Philander bowled full searching for some swing, drove him through covers. He nearly chopped one back onto the stumps and then went past MS Dhoni’s record of most runs as India test captain with a single to move to 40. However, after adding a single to his total, Kagiso Rabada slipped in a cutter that sneaked through Kohli’s defences and crashed on the off stump. Rahane had a nervy start to his innings before settling in. He pulled a short one from Morne Morkel that fell safely in the fine leg region after taking the top-edge. Then he received another short delivery in the same over which flew over backward square leg but landed safely. Those jittery moments were enough for Rahane to get a hang of the pitch. Soon he was playing drives, cutting uppishly, not fearing to play in the air. He had Hardik Pandya for company who copped a blow to his left glove before ducking to avoid a bouncer, both from Rabada. He would later fall to the same bowler, a one-handed catch in follow through, to walk back on 4. Indian batsmen braved it out earlier with their lower order pushing the lead to 240 runs. The tail wagged and wagged enough to frustrate South Africa as India were all out for 247 in their second innings. Crucial contributions from Bhuvneshwar Kumar (33) and Mohammed Shami (27) helped them set South Africa a challenging target on a surface which has come under heavy scrutiny for its erratic nature. Addressing a press conference after the day’s play, Rahane gave the example of how his team’s batsmen negotiated the South African bowlers. “Wicket was challenging. It was similar for both the teams,” Rahane said. “[Murali] Vijay scored 25 runs. Our openers played well. When me and Bhuvi [Bhuvneshwar Kumar] were batting, we were not thinking about the wicket but focusing on the delivery.” The Mumbai batsman said that India tailenders also had to deal with short deliveries and they batted without raising any objections over the pitch. “What about them bowling short balls to our bowlers. When Ishant [Sharma], Bhuvi, [Mohammed] Shami and [Jasprit] Bumrah were batting, everyone was bowling bouncers. I don’t think it is a dangerous wicket, yes, it is a challenging wicket,” he observed.]]>