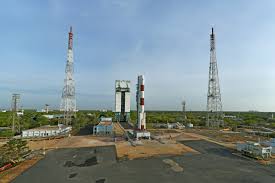 Isro to again showcase multiple-burn tech 100th Satellite Launch As Countdown Begins The countdown for the launch of ISRO’s 100th satellite along with 30 others in a single mission, from the space port of Sriharikota, around 110 kilometres from Chennai, began today. This will be the 42nd mission of ISRO’s trusted launcher PSLV, or Polar Satellite Launch Vehicle. The launcher for this particular mission – the PSLV-C40 – will carry the 710 kg Cartosat-2 series remote sensing satellite for earth and weather observation. It will also launch thirty other satellites having a combined weight of around 613 kg at lift-off. The nearly 45-metre tall PSLV-C40 rocket will be launched from the First Launch Pad or FLP of the Satish Dhawan Space Centre in Sriharikota. The time for the lift-off has been set at 09:29 am tomorrow. The Indian Space Research Organisation said this morning that the Mission Readiness Review committee and the Launch Authorisation Board have both cleared the 28-hour countdown which started precisely at 05:29 am IST today. The launch on Friday carries significance for two reasons. Isro is back in the game four months after the failure of its previous PSLV mission on August 31, 2017. The rocket will also place Isro’s 100th satellite in orbit. “This time, the rocket will have the same configuration as demonstrated during the previous missions,” said R Hutton, mission director. The fourth stage engine will ignite for the first time eight minutes into the mission and will be shut off eight minutes later. The rocket will then place 30 satellites including its main payload, Cartosat-2S series, seventh in the series, and 28 foreign satellites within a period of 42 minutes into polar sun-synchronous orbit at an altitude of 505km. The engine will then restart and shut off twice as it manoeuvres to an altitude of 359km within an interval of nearly 45 minutes before it injects the last satellite into orbit. If we have excess capacity in our rocket, we can launch satellites in different orbits,” said a senior Isro scientist. Placing satellites in different orbits through a single rocket will save money and help launch more commercial satellites. But using the multiple burn technology comes with different challenges. “PSLV launches usually last for 20 to 25 minutes. But this launch lasted for more than an hour. It is almost like having two separate launches,” said B Jayakumar, during the launch of PSLVC35 in September 2016, where the multiple burn technology was demonstrated.]]>