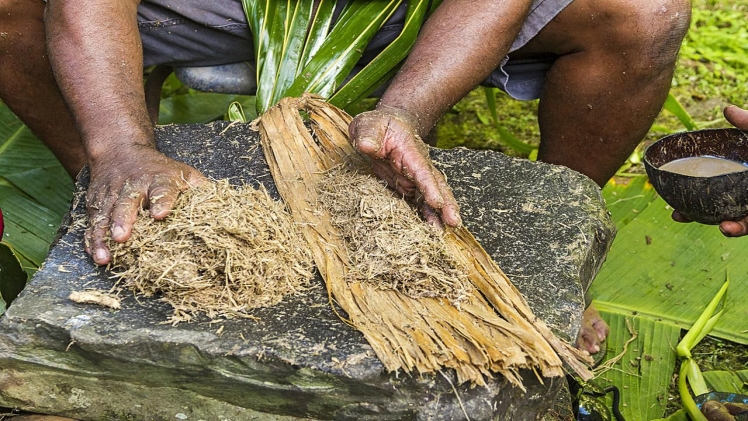 Home news Kava: Overview, How it is used, Advantages, Side Effects, Precautions

Kava is an extract or a beverage that is made out of Piper methysticum, which is a plant that is found in the Pacific Ocean islands. The word “kava” comes from the Polynesian word “awa” which means bitter. The name of Kava literally means “intoxicating pepper”. Kava is a very famous social drink in the South Pacific that is similar to alcohol in Western societies. It is consumed as a beverage in ceremonies for the promotion of relaxation.

People in Fiji and Tonga used to dry out the roots or crush them into a powder. Then they add water to it and drink the mixture as their traditional medicine and in social gatherings.

How it is used?

kava contains substances which are known as kavapyrones which act much like alcohol on your brain, which makes you feel happy, relaxed, and calm. This plant is also known for preventing seizures, relieve pain, and relax muscles.

You can buy Kava as an herbal supplement in health food stores and online. It is available in tablets, tinctures, or in capsules (it means it is dissolved in alcohol).

Kava is commonly used as alternative medicine as a natural anxiety-reducing drug beyond its ceremonial and recreational use. It also assists people with insomnia to improve sleep. The compounds present in Kava root are believed to offer mood-altering properties which are called kavalactones.

Kava May Assist In Sleeping

A lack of sleep may be associated with many medical-related issues that include high blood pressure, depression, obesity, diabetes, and cancer.

When people realize this, many people start to take sleep medications that would assist them to get better sleep. As drugs used to treat anxiety, sleep medications may in turn become your habit that results in your physical dependence.

Due to the calming effects of Kava, it is commonly used as an alternative to these sleep medications. As compared to placebo kava was found to reduce more insomnia and stress.

One of the most common psychiatric disorders today is anxiety disorders. Commonly these are treated with medications or talk therapy or both. Numerous medications are available in the market, but they may turn into habit-forming or may result in unwanted side effects. It has enhanced the demand for natural remedies that are presumably safe like kava.

Kava significantly decreased the severity of those people who were suffering from anxiety as compared to placebo. It was also noted that there were no side effects related to dependency or withdrawal of kava. On the other hand, these are very common side effects with another drug which are generally used for the treatment of anxiety.

Side Effects of Using Kava

When kava is taken by mouth for a short period of time it is possibly safe. When you consume kava, it can make you unable to operate machinery or drive safely. You should not do the consumption of kava before driving.

You might have ever heard that consuming kava can cause liver damage. If you use kava for as much as 1-3 months has resulted in the requirement for liver transplants and even in the death of some people. Yellowed skin and eyes (jaundice) fatigue and dark urine are the early symptoms of liver damage. However, these cases are appeared to be relatively rare. But most of the patients who were using kava may not have experienced liver toxicity.

On the other hand, some experts used to believe that liver toxicity which has been seen in some cases may not be directly linked to kava. People who are consuming kava should take regular liver function tests to keep themselves safe.

Precautions To Be Taken While Using Kava

Kava was found to cause liver problems even in a healthy body. So, people should avoid using kava if they are already having liver disease, because it may be a risk for them.

People should also not consume kava if they are suffering from Parkinson’s disease, because it may make their condition worse. Consumption of kava may also in turn make the condition of depression worse. When a lady is pregnant or doing breastfeeding she should avoid using kava. It is generally unsafe when it is taken by mouth and it might affect the uterus. Dangerous chemicals that are present in kava may also get passed into the breast milk which may, in turn, affect a breastfed infant.