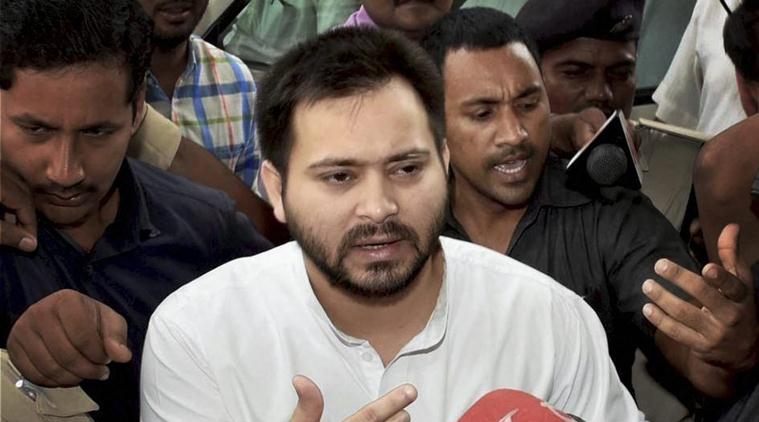 Lalu Prashad Yadav sonTejashwi Yadav today claimed that BJP would have given his father title of ‘Raja Harischandra RJD leader and son of Lalu Prasad Yadav, Tejashwi Yadav today claimed that BJP would have given his father title of ‘Raja Harischandra’ had he aligned himself with BJP. He accused Bihar CM Nitish Kumar of being insecure of Lalu and colluding with BJP to play dirty politics of creating a negative perception about Lalu. Former Bihar chief minister Lalu Prasad Yadav has been sentenced to three and a half years in jail and a penalty of Rs 5 lakh in connection with the multi-million fodder scam case. His jail term would extend by six months if the RJD chief fails to furnish the Rs 5 lakh fine, the Ranchi Special Central Bureau of Investigation (CBI) court said. Convicts Phool Chand, Mahesh Prasad, Bake Julious, Sunil Kumar, Sushil Kumar, Sudhir Kumar and Raja Ram have also been sentenced to 3.5 years in jail and Rs 5 lakh fine each. The sentencing was announced by the Ranchi Special CBI court on Saturday via video conferencing. Lalu had on Friday filed a plea of leniency stating that he is dealing with a lot of health issues. “Lalu has diabetes, blood pressure; he almost fainted yesterday,” his lawyer had said on Friday. “If Lalu ji had done compromise with BJP, he would be the most truthful person for them like Raja Harishchandra. It is clear that the BJP-RSS combine is scared of Lalu even while he is is in jail and is doing all that it can to silence Lalu’s voice,” said Tejashwi, while addressing a press conference. It should be noted that Lalu Prasad was today sentenced to 3.5 years of imprisonment by a special CBI court in the second fodder scam case in which he was found guilty. Tejashwi, who was the former deputy CM of Bihar, said that he along with Lalu’s lawyers will go to High Court and even Supreme Court to appeal against the sentencing. “We have full faith in judiciary. It is a conspiracy to break RJD by RSS in which Lalu ji was made a scapegoat. But they should remember that we still have High Court and Supreme Court to appeal against the judgement by CBI court,” said Tejashwi. “Come what may Lalu will never get scared, nor will he even kneel down. In fact, he will always stick to his ideology,” added Tejashwi.]]>