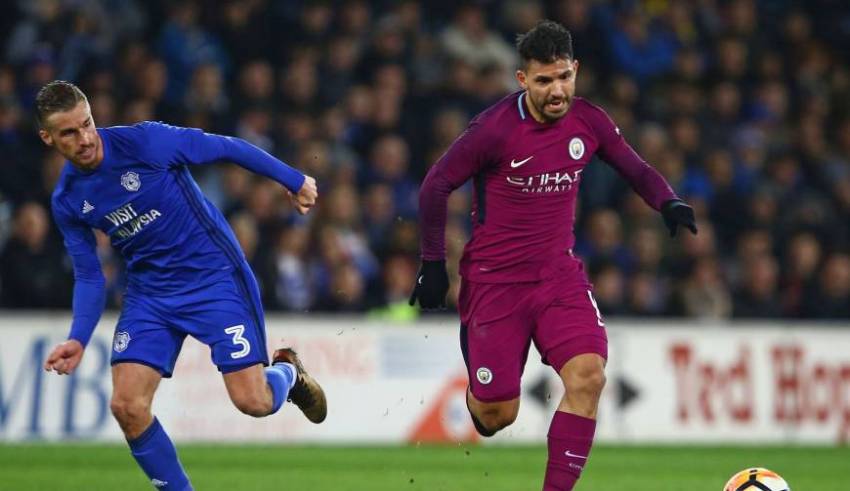 <![CDATA[]]>
<![CDATA[]]>
Home Sports Manchester City eased into the fifth round of the FA Cup with a 2-0 victory at Cardiff, as their march towards an unprecedented trophy clean sweep continued.

Manchester City eased into the fifth round of the FA Cup with a 2-0 victory at Cardiff, as their march towards an unprecedented trophy clean sweep continued. Kevin De Bruyne and Raheem Sterling scored on the day that a new attendance record of 32,339 was set for a club game at the Cardiff City Stadium. De Bruyne’s eighth-minute free-kick was a candidate for the cheekiest goal of the season as he sent the ball under the Cardiff wall, while Sterling’s header gave City a two-goal cushion before half-time. Cardiff were committed throughout – too much at times with defender Joe Bennett sent off in stoppage time – but the gap between the top of the Premier League and third in the Sky Bet Championship never looked like being bridged. It was the second time this week City beat a second-tier opponent. The runaway Premier League leader saw off Bristol City in the semifinals of the League Cup to clinch its first final under Guardiola. With a commanding 12-point lead in the Premier League and a favorable draw in the form of Swiss side Basel in the Champions League round of 16, every victory from here on will increase talk of an unprecedented quadruple for City. When asked if City could achieve the quadruple, Guardiola made his feelings clear. “No. They asked me if we would be invincible in the Premier League and I said no,” Guardiola told the BBC. “I do not have enough players, I have players out injured. It is impossible.” Chelsea will join City in Monday’s draw after Michy Batshuayi’s double paved the way to a comfortable 3-0 fourth-round victory over Newcastle. De Bruyne’s clever free kick gave City an early lead before Sterling doubled the lead shortly before halftime. But City was dealt a blow when Leroy Sane was forced off injured at the break. Having been put through on goal in first-half stoppage time, Sane was scythed down by Cardiff midfielder Joe Bennett, who was fortunate to receive just a yellow card. “Referees have to protect the players and not just my players, all players. Where there is fault, there is fault and when it is dangerous, it is dangerous. You are not more brave for kicking,” Guardiola said. “Sane will be out, I am not sure how long for, I am not a doctor.” Bennett was eventually sent off as he received a second yellow card for another poor challenge on City youngster Brahim Diaz in the closing stages. It took just eight minutes for Cardiff to join a growing group of clubs made to look foolish by De Bruyne this season. With City’s chief creator standing over a free kick 25 yards out, Cardiff expected him to attempt to find the top corner. Instead, the Belgium midfielder cheekily rolled his free kick under the jumping wall and into the net. “They tell us before the game, we know all the details,” De Bruyne said. “The wall was not on nine meters for me, so they were very close, so I thought it was easier to put it under than over.” Bernardo Silva had a thunderous strike harshly ruled out with the linesman appearing to adjudge Sane offside and interfering with Cardiff goalkeeper Neil Etheridge’s line of vision. But City soon doubled its lead when Sterling continued his prolific season, converting Silva’s cross with a precise headed finish eight minutes before halftime. After exiting the League Cup midweek at the hands of Arsenal, Chelsea ensured it reached the fifth round of the F.A. Cup for the 18th time in the last 20 seasons. Marcos Alonso scored a stunning free kick to seal the victory after out-of-favor Batshuayi had given Chelsea a scarcely deserved 2-0 halftime lead against Newcastle.

Kenneth Zohore forced Bravo into a save and Hoilett’s rising 20-yard effort just cleared the crossbar, before Cardiff were reduced to 10 men in the final seconds when Bennett saw a belated red for another poor tackle on City substitute Brahim Diaz.
It was only a second win — inside 90 minutes — in eight games for Chelsea in what has been a testing January. Various reports have suggested the club is looking to recruit a new striker, but it was the sparingly used Batshuayi who delivered on this occasion. “For sure the performance for the press (media) depends a lot if a striker scores or not scores,” said Conte of his striker, who has scored 10 goals this season and has also been linked with a loan move away from Stamford Bridge. “For me it’s important to score because it means that you have a probability to win, but at the same time it’s very important that the striker has to work very well for the team.”]]>