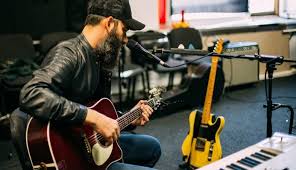 The producer of Machete band, Mikhail Peleg, shared information that the group is going to return to the big stage soon after a long break.

The members of Machete managed to travel during their hiatus to various countries, including Singapore, Bali, Israel, and India. At the same time, there was no real break in creative work. According to musician Yaroslav Malyi, the group was constantly working on a new album. Soon the band will be able to present their new album to the audience.

Yaroslav shared that over four years ago, members of the band decided to pause their concert activity. They tried to understand themselves and their work as much as possible during this time. They meditated and studied spiritual practices. It was very important for each member of the band to understand themselves and their aspirations. They wanted to rethink their creative work, and the group has successfully done that. After their creative search, the members of Machete were able to write lyrics for a new album and come up with new music that fully shows their vision of life and love.

Yaroslav Malyi said that the decision to stop the performances was made mutually by all members of the band. Like all creative people, the musicians decided to take a break to achieve something new and valuable as a result. At the same time, during their hiatus, the band members worked with famous musicians from around the world.

Now the producer of the band is Mikhail Peleg. Together they are preparing several new exciting projects, and the audience will soon see them. According to Mikhail Peleg, the band is worth respecting and praising, because the artists have shown themselves to be goal-oriented and very talented.

The musicians themselves say that the new album combines several musical styles, which should be interesting to the audience. Yaroslav Malyi confidently says that the band has put their soul into writing lyrics and music. He believes that their audience will appreciate the result.

The first song of the album will be “Sky is my home.” It touches on deeply philosophical topics about the main and secondary things in the life of every person. It is the first composition that will help to give an understanding of the essence of the entire album.

There are some changes in the members of the band. Now Mikhail Lisov will play the guitar, and Alexander Zinger will play the drums.

We recall that Machete project was created back in 2010. This project helped Yaroslav Malyi to leave the Internet space and win the love of a wider audience. The team’s creativity was immediately highly appreciated by the audience, and already one of the first videos (for song Tenderness) gained more than 33 million views on YouTube. Now the band will continue its work in an updated composition.