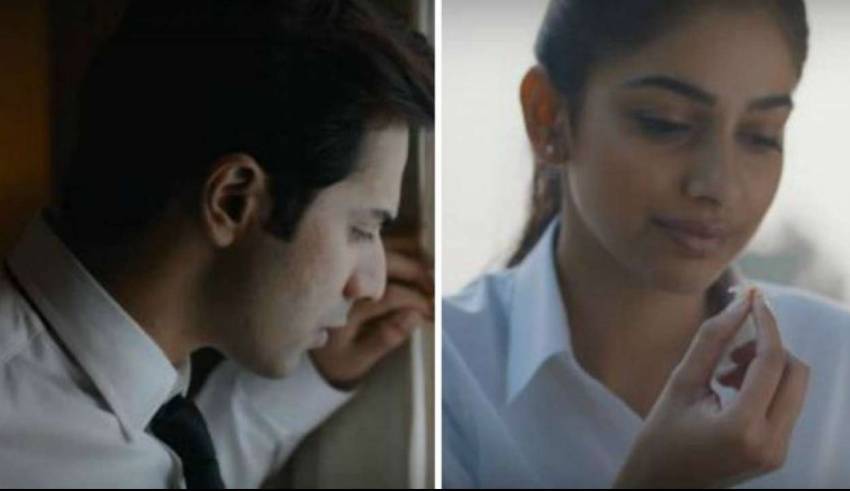 OCTOBER SONG THEHER JA : ARMAAN MALIK’S SONG FEATURING VARUN DHAWAN AND BANITA SANDHU Armaan Malik’s first song ‘Theher Jaa’ will make you feel the love After a feel-good yet emotional trailer of Varun Dhawan and Banita Sandhu starrer ‘October’ , makers have dropped the teaser of the first song Theher Ja  from the october  movie. Shoojit Sircar’s films have always boasted of good and soothing music and October seems to be yet another album to watch out for.The makers of October are actually garnering praise from the public on social media platform. After releasing the teaser and the making of the theme song, they released a teaser of the october movie song Theher Ja.

Theher Ja  song sung by Armaan Malik has been penned by Abhiruchi Chand and composed by Abhishek Arora.Varun Dhawan shared the the teaser on Twitter and wrote, ‘A song that will make you feel the love.” Armaan Malik, who has  given  Bollywood with many  chartbuster hits , is extremely elated to lend his voice for October. The young singer had earlier expressed his wish to sing for Varun and his prayers were heard by the makers. About being the voice for Varun in October, Armaan said, “I’ve expressed in various interviews in the past that it’s my wish to sing for Varun Dhawan and when he announced to the world that I’m the voice of October, I was over the moon. Even both our fans wanted us to come together and collaborate on a song. So finally, my wish has come true and I’m really excited.” Theher Ja song from october  is a soul-stirring number with foot-tapping rhythm. Armaan said said mumbai mirror, “’Theher Ja is feel-good track. It talks about the emotion of love in a very simplistic manner which is why it will make it more relatable and appealing to the youth. This song is unlike the usual Bollywood romantic songs you hear and has a very European vibe to it and for that very reason it will stand out. This is my solo song.” At the trailer launch of October, Varun shared his excitement for the project. He said, “When I sign a film, I look at the script more than anything, and how much the maker is putting in the film. In ‘October’ Shoojitda, writer Juhi Chaturvedi and every one of our crew members put their heart and soul in it. I had to be a part of this film. They signed me for the film even before ‘Badrinath Ki Dulhania’ and ‘Judwaa 2’.