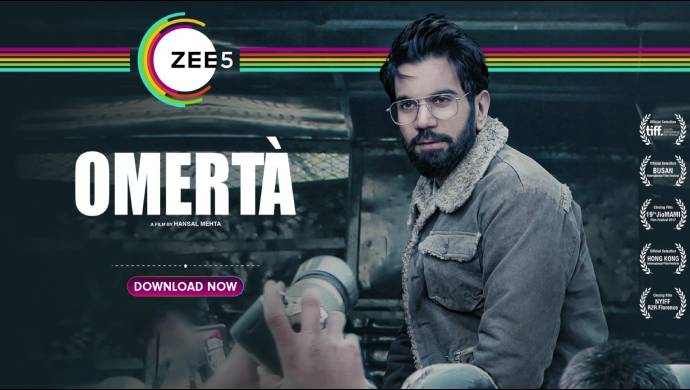 From Offices to work from home, the outbreak of the COVID19 pandemic has brought so many changes in our life. While life is getting back to normal from ‘lockdown to unlock’ in a phased manner, it will take time to enjoy and live life in the same way we used to do before this pandemic.

During the hectic WFH schedule, watching movies and web series has become my daily routine. While doing so I came across Omerta movie on Zee5 and I was completely blown by this amazing movie. Starring Rajkummar Rao in the lead role, Hansal Mehta’s biopic makes a must-watch this weekend. Let me tell you more about this movie.

Omerta is a Hindi biographical crime drama on Omar Saeed Sheikh, who abandoned a degree at the London School of Economics in the 1990s to answer the call of Jihad. He was jailed for hijacking IC-184, kidnapping British and American tourists in 1994 in Delhi. He was freed in 1999, thereafter he settled in Pakistan, where he was involved in abduction and execution of Wall Street Journal reporter Daniel Pearl in 2002.

Rajkummar Rao slays it totally as dreaded terrorist Omar Sheikh with his pitch-perfect performance. The transformations from British Upper lipped enunciation to a desi accent to a calm smile while getting arrested – Rajkummar’s nuanced performance in this riveting thriller catches each and every aspect of Sheikh’s chilling demeanor. ‘Salaam Doctor Sahab’ gave me the chills every single time…I just can’t stop but think how would it feel to be in the position of Victims.

Keval Arora as Omar Sheikh’s affectionate father is completely relatable. As a father who knows that his son is going down a dangerous path, he objects to his choices, but he is not able to stop his son with his little efforts.

The rest of the supporting cast including Timothy Ryan Hickernell as Daniel Pearl, Rajesh Tailang as General Mahmud, has also done a brilliant job.

Hansal Mehta has done an exceptional job when it comes to showcasing the timeline of terror events in the background with Omar Saeed’s life as the focus. The cold-blooded execution of Daniel Pearl stands out in ‘Omerta’. This scene has the potential to blow your mind away. The film aptly focuses on Omar’s talented and witty persona. With a few dialogue sequences and scenes being shorter have been weighed less than the others.

The movie slices through time and space in editor Aditya Warrior’s hands, Omerta plays out like a crime thriller, the anticipation heightened at each step by Mandar Kulkarni’s sound work and Ishaan Chhabra’s score.

Besides, the unrelenting pace of the movie ‘Omerta’ and immersive acting by Rajkummar Rao makes it impossible to turn away from the screen for a single moment of the film’s compact 97 minutes and 37 seconds. To call this Hansal Mehta’s Bioptic a gripping thriller might be an understatement.

So, download the ZEE5 app and watch this movie on the weekend. Do not forget to share your experience with me in the comments below. Bub-bye!