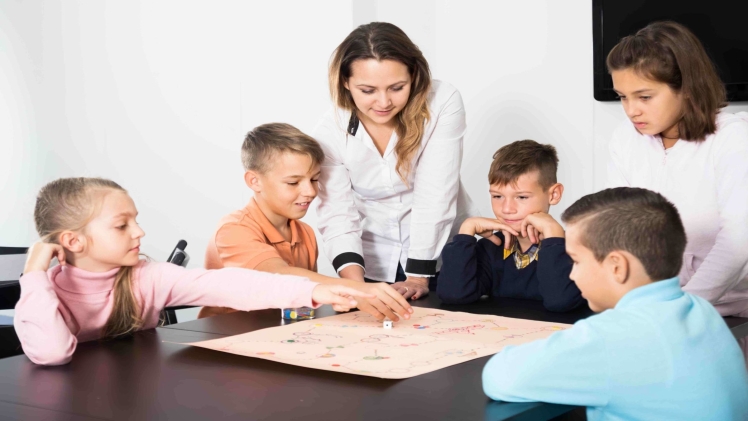 Home game Random Games to Play with Children In The Classroom

Here are some games to play with children in the classroom:

To play Buzz, you have to pick a series of words that you want the children to list out (for example prime numbers, 10-20, etc). After that, you have to decide on the buzz word. It can be every third or fifth number or in the series. Then, the world “buzz” will have to replace the number you have decided to be the buzz word. Then, have the kids read out the numbers after replacing the chosen number with the buzz.

And anyone who forgets to replace the number with “buzz”, will be out of the game.

This game is fun and ideal for primary level students. To play this game, have the kids lined up in the form of a train. Then, command them like, “turn right”, “slow”, “fast”, “turn left”, “stop”. Children will love this game.

The Chain Spelling game requires at least six players. To play this game, interlink two or more words that aren’t related to each other, based on their spellings. Write any word on the board (except -ing or -ion words). The first player has to take the last 3 letters of the word and form a new one. The second player does the same and it continues until a player is unable to form a word. The player who is unable to form a new word has to be out of the game.

If you don’t want to put efforts on choosing words, tap the link below: Random Name Software in Singapore.

This game compels the children to think about the words’ meaning and helps them improve their vocabulary. It requires at least six players. To play this game, pick a word first. Make sure that none of the players has heard of the word before. Then, write the meanings of the words on a sheet of paper and have the players write down what they think the meanings are. Then, collect the sheets and read out the meanings and make the players consider the meanings and vote. Give them a point for each correct answer and the one with more points is a winner!