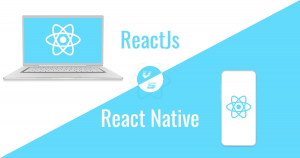 React and React Native are two different technologies with vast similarities & a common name owing to the same creator & similar properties. However, confusing one for the other has become a significant issue with software development projects.

When analysing React vs. React Native, you can start with the basics. While React is simply a JavaScript library, React Native is an entirely open-source framework. So you get vast differences in the compatibility and application of these two homonyms.

Overall, React is a fine choice when creating web applications. In contrast, React Native is the framework to trust for mobile applications. This blog post helps you understand React vs. React Native comparison by illustrating the following points:

Maintained by Meta Community, React is an open-source JavaScript library developed for front-end development. The library facilitates the creation of advanced UI interface designs using a component-based architecture. Released in 2013, the framework gained immense popularity in less than a decade, and many large-scale enterprises, including Facebook, Skype, Instagram, etc., are using it. React is also called React.js and refers to the same.

A React front-end developer can customize fast and intuitive user interfaces that run effectively for websites or web applications. Choosing React for your web application comes with a host of benefits. However, it also has some cons like any other front-end tool. Let us explore them in detail.

ReactJS comes with reusable components, which allows developers to use earlier developed concepts for newer applications. In simple words, React.js developers don’t need to establish each functionality from scratch. They can simply leverage already set ideas to create applications in no time.

Reactjs library comes with Virtual DOM, multiple times faster than the accurate DOM model. The virtual DOM model allows developers to make changes in the code snippets and lets minimum modification in the original code. Thus it requires less time to work with ongoing changes in the web development process.

ReactJS comes with one-way data binding, allowing the programmer’s team to easily track all the changes made to any particular data segment. It leads to a greater level of simplicity in the web development project.

React-based UI designs are SEO-friendly and rank well over the search engine. So, it is a preferred choice for websites and applications dealing in eCommerce or anything for general people.

Programmers can handle the selected parts of the UI interface via significant data modification and fewer clicks. Along with its intuitive approach, it ultimately supports more fantastic UI modifications, thus acting as simple to use the library.

When should you use React for software development?

React is ideal for web-application development projects that require multiple updates. React.js consultants are a practical option when looking for a software team that provides you with a faster time-to-market. React inbuilt capabilities supports quicker development and lower project costs.

So, you can have cross-platform mobile applications that leverage platform-centric features effectively. Let us have a detailed look at the pros and cons of ReactNative to help you analyse when you should choose it for your project.

Having a single codebase for multiple mobile OS is among the significant benefits of using React Native for your mobile application. It also facilitates smooth updates over various platforms as the code base remains the same.

React Native has enormous community support, and according to Statista, it was the second most popular cross-platform framework in 2021. It was second only to flutter and held the popularity of 38% among software developers worldwide.

Creating high-performance applications with React Native helps you ensure a healthy user experience for the project. React Native is considered an ideal framework for developing simple to mid-level complexity mobile apps. However, when creating a heavy application with many features, React Native may not prove a compatible framework.

React Native comes with hot-reloading, which allows developers to view the implemented modifications in real time. So the programmer’s team can update and modify the process simultaneously in a limited time.

React Native helps you create a uniform brand appeal by getting a similar UI on Android and iOS. It facilitates companies to generate brand credibility and greater trust with the developed application.

When should you use React Native for software development?

React Native is a good choice when creating mobile applications with fewer screen transitions. You have a single codebase for Android and iOS. So, you get access to smooth updates and consistent Layout over both the major platforms.

I hope by now you must have a concise idea of React vs. React Native. It’s ideal to hire a React.js developer when creating a web application or website. In contrast, go for React Native when developing a mobile application with fewer screens.