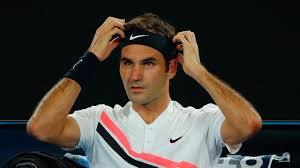 <![CDATA[]]>
<![CDATA[]]>
Home Sports Roger Federer defends heat policy It’s a matter of do as I say, not as I do, for the protected species

Roger Federer defends heat policy It’s a matter of do as I say, not as I do, for the protected species Australian Open organisers defended their heat policy Friday as Roger Federer downplayed the oven-like conditions on the court, saying players should be fit enough to deal with it.The comments follow suffocating weather at Melbourne Park on Thursday, which some players struggled with, and more of the same on Friday where it was heading to a forecast peak of 42 Celsius (107.6 Fahrenheit).Novak Djokovic on Thursday described the conditions as “brutal”, complaining it was hard to breathe and they were “right on the limit”. Organisers will only active the extreme heat policy and halt play or close roofs when the temperature exceeds 40 Celsius and the wet bulb globe temperature index hits 32.5 Celsius.Tournament director Craig Tiley said the Australian Open was one of the only events in the world to actually have a heat policy. “The policy is from consultation with the players, and remember in most places, be it the Middle East or others parts where it is very warm, they don’t have a heat policy,” he said.”Throughout the site we have ice misters, there’s plenty of water. For the players there are ice vests, there are long periods of rest and they of course have shade on their chairs,” he added. “These are professional athletes. We are at the end of the day an outdoor event. We want it to stay an outdoor event as long as possible but at the same time ensuring that the health and wellbeing of players is taken care of.” Federer escaped the worst on Thursday, playing a night match on Rod Laver Arena, but said he had endured searing Australian temperatures plenty of times and experienced worse. “If you want to get to the top, you’ve got to play in all conditions,” he said. “We know it can be very hot here in Australia. I remember the days when we had four days of 40 degrees in a row a few years back. Now we got two.”It’s definitely a challenge,” he added. “It’s hard to prepare for that in some ways. But you know when you come down here that can happen.”Sure, I was watching the other players suffer. As long as nothing bad happens, it’s all good.” Among those in trouble was Gael Monfils, with fears for his health in his mid-afternoon match against Djokovic. The Frenchman, known as one of the fittest players on tour, looked dazed and confused in the second set and eventually got medical assistance.He said afterwards he was “dying” on court.Federer said it was a tough call to make on whether to halt play or not.”What do you do? You stop all matches?,” he asked. “The lucky guys on the big courts, they get to play under the roof. The other guys get postponed till the next day? Is that great? That’s not great either.”He added that all the players knew these conditions could happen, and it was a level playing field. “Everybody has to face the similar issues,” he said. One of the worst years for heat at the Open was 2014, when many players were in trouble. Among them was Blaz Kavcic who was placed on a drip, while Frank Dancevic said was hallucinating about cartoon character Snoopy in his dazed state.A cooler change is expected to blow through Melbourne later Friday.Djokovic battled Gael Monfils during the worst of the day’s heat, winning 4-6, 6-3, 6-1, 6-3 in four eventful sets where Monfils suspected he suffered a heat stroke for about 40 minutes after he started feeling “super dizzy” during the match. ESPN commentator Chris Fowler reported Djokovic requested to play during the day, an odd call considering the six-time Australian Open champion hadn’t played professional competition for nearly six months, and a claim Djokovic denied. “Our sport has become an industry,” Djovokic, who’ll play 21st-seed Albert Ramos-Vinolas on Friday, said. “It’s more business than a sport. At times I don’t like that. Of course we’re all blessed to have great financial compensation, great lives. I’m very grateful for that. At the same time, what is most important for us is our health and what happens after our careers, after you’re 30, 35. There are many players [who] can’t physically walk, run, jog, whatever. They’re struggling some way or another, health-wise or physiologically.]]>