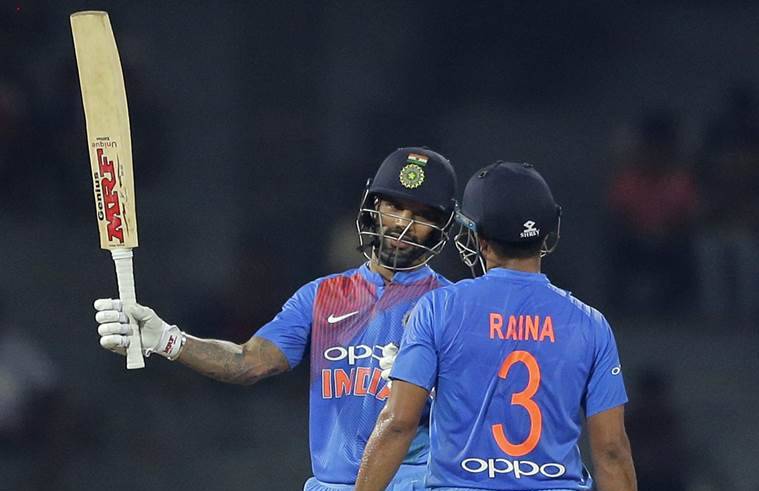 Vijay Shankar and Shikhar Dhawan’s 50 helps India to register six-wicket win over Bangladesh Good day for the tri-series then. Showstoppers India get off the mark, having now beaten Bangladesh in six out of the six Twenty20 Internationals  India claimed their first two points of the Nidahas Trophy with a comfortable six-wicket win over Bangladesh. Shikhar Dhawan was the star of the show for India scoring his sixth T20I fifty and anchoring the Indian innings. For a better part of the chase, he was given company by Suresh Raina after Rohit Sharma and Rishabh Pant departed without affecting the scorecard too much. The two put up a 68-run partnership for the third wicket, practically winning the match for India. Rohit Sharma was the aggressor in the short opening stand that India enjoyed. He made 17 off 13 balls, his innings punctuated by three fours, before playing on to his stumps off Mustafizur Rahman. Rishabh Pant was then promoted up the order and looked like he was getting his eyes in. But Rubel Hossain forced him to chase a wide ball and he ended up playing it on to his stumps too. Suresh Raina then came in and managed to expunge the little pressure that Bangladesh had managed to build around the Indian innings. Dhawan and Raina took India to 108 before the latter was dismissed by Rubel Hossain. Dhawan soon fell too but by then, India were on 123. Manish Pandey and Dinesh Karthik then easily saw it through for India Bangladesh batters, from the outset, began with an aggressive mindset, throwing their bats to everything that was hurled at them. The urge to provide a quick start overpowered their ability to think wisely. In all, they batted against 122 balls and wasted 57 balls – dot balls – to end up at an under-par 139. Forty-six per cent of the deliveries they faced didn’t fetch them a run. More than the wickets, it’s the dot balls that usually hurt a team While the batsmen were efficient, India were found wanting during Bangladesh’s innings. The bowlers gave away 11 wides and two no-balls and there were a number of misfields and dropped catches. Jaydev Unadkat were the pick of the bowlers, taking three wickets for 38 runs in his four overs. Vijay Shankar followed suit with two wickets while Shardul Thakur and Yuzvendra Chahal took a wicket each. The fact that Bangladesh managed to make just 139/8 despite all the freebies only showed the gap in quality between the two sides. India have thus maintained a 6-0 record over Bangladesh in T20 Internationals. India have thus got their first two points of the Nidahas Trophy and have taken the top spot due to their superior run rate. Rohit – captain, India: “I think it was a great performance, something that was expected from us. Right from the start to the end, it was clinical and a complete team effort. We looked into what went wrong in the game against Sri Lanka and we thought hitting the length was the option for us. We wanted their batsmen to take on the longer boundaries. Bowlers executed plans very well. We kept it simple and got the basics right, which was missing in the first game. Catching is something where there’s always room for improvement. We want to get better as a fielding side. We are much better than that.” Mahmudullah – captain, Bangladesh: “We didn’t bat well. We should have scored 30 more runs. We need to find out how to get runs on these kind of wickets. Think the bowlers did a pretty good job. We need to rotate the strike more often. Dot balls create pressure on batsmen. Need to find gaps and get boundaries in the middle overs. One win will boost us and will reflect in our game. Hopefully we’ll get it.” Vijay Shankar – Player of the Match: “Been looking forward to this. Have been working hard, so very happy. Bowling has given me something extra in my game. We got wickets today, which helped us restrict them. A lot of people (inspired me). B eing with this team is a dream for every cricketer. Everyone in the dressing room is very supportive.”]]>