Basketball is one of the most popular games in the world and among the highest paying. Some of the highest-earning basketballers earn up to 40 million dollars in a year. It is not easy to penetrate the competitive sport since the draft pool is flooded with many aspiring players with exceptional skills. It is only by getting the basics right and constant practice that you can really test yourself and how far you can go in regards to professional gaming. We let you stay updated on everything basketball from concise guides and the latest stories creating waves in the glamorous world of basketball.

Professional coaches will tell you that basketball is a sport, as well as a mind game. The best basketball teams recruit exceptional talent and seasoned coaches to ensure they get a working team that perfectly understands the rules and can generate a winning culture. If you are seeking to improve your court performance, this is the perfect article for you. Below are the basic defending and offensive skills you can apply to improve your game.

Good offense without a supportive defense can only win simple matches but hardly win a championship. A good defensive system ensures the team remains in control of the game. Therefore, the best way to defend depends on a team’s ability to make the offense play into their strategies. It is paramount to know your opponents’ strengths to plan ways to immobilize them strategically.

Although defense strategies and tactics vary, they all revolve around the same logic. You either defend the team by applying the man-to-man method or defending a section of the attackers’ route or zone. The last would be to combine the two.

The man-to-man defense system is the most basic. Hence no other strategies work without the players knowing how to play by this strategy. It could be employed in different ways, including the switching of cover targets. Players can exchange targets during gameplay while still maintain the man-to-man formation.

The tight man-to-man method works vise versa to the loose one. The method works best for slower players and could be reliable when the target makes long shots. Before choosing this strategy, the main game facts to consider are the size, ability, and position differences.

On the other hand, zone defense works by assigning players to defend specific areas of the court. The opponents’ abilities determine these areas. Some opponents are good outside shooters; hence, defenders may be assigned to protect their strong areas once they approach them and move back to their position once the opponents leave. They do not follow the targets around like they would in a man-to-man defense.

Most armatures go over and beyond perfecting dribbling skills rather than learning the more effective passing skills. Although the offensive team’s main goal is to identify gaps quickly, they may also trigger the game to work in their favor through fast passing sequences. When things move fast, the defensive team will be forced to move around, hence become less aware of the offensive team’s organization and strategies. After a considerable number of passes, the defensive team will break formation and create a gap for the attackers to make a shot. 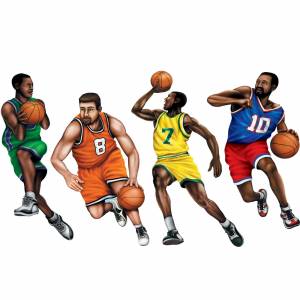 Often, offensive teams attack by letting one of their players stand in the way of the opposing team’s defender charged with man-marking the shooter. This way, the defender will be blocked, allowing the offensive player to make their move. This way, the two attacking players are able to close in on the hoop. The player with the ball could take a shot or pass the ball to the other offensive player if they are better positioned to shoot. If done perfectly, these moves will be effective in opening up even the most rigid defense.

The more you practice, the more you understand how these rules work. More advanced offensive tricks involve checking to see how a defender positions the feet and arms. Knowing defenders lead foot and arm would help you make better attacks since you would know which side they are more likely to turn. You can either attack from behind or perform a pump fake move to let the defender make the first move.

Evidently, basketball is a game where success is driven by the players’ and teams’ abilities to implement small and big strategies. Knowing the basic defending and attacking skills plays a significant role in improving one’s gameplay. After the execution of the discussed strategies starts to feel natural, it would be best to dive into more advanced strategies, including the combination of man-to-man and zone defense systems, which gives room for more creativity.