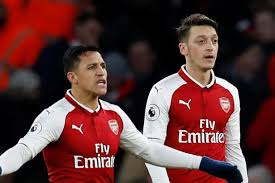 Swansea Stun Arsenal, Liverpool Cruise Petr Cech’s howler rocked Arsenal as they crashed to a shock 3-1 defeat at Swansea, while Liverpool cruised to victory over Huddersfield on Tuesday.Arsenal goalkeeper Cech’s miscued attempt to clear allowed Jordan Ayew to slot home Swansea’s second goal at the Liberty Stadium. It was the killer blow for Arsenal, who had already seen Sam Clucas equalise just one minute after Nacho Monreal put the visitors ahead from Mesut Ozil’s pass in the 33rd minute. Clucas claimed his second four minutes from time to finish off Arsenal, who have now won just once in their last five league games. The result leaves Gunners manager Arsene Wenger still searching for his first away win of 2018, despite a second-half debut for substitute Henrikh Mkhitaryan following his move from Manchester United. The Gunners are in sixth place, trailing eight points behind fourth-placed Liverpool in the race to qualify for the Champions League via a top-four finish. The arrival of Borussia Dortmund striker Pierre-Emerick Aubameyang, set to sign on Wednesday’s transfer deadline day, can’t come soon enough for Wenger. “We will know more about that tomorrow morning,” Wenger said of the Aubameyang move. “I felt defensively we were very poor and made big mistakes. It’s better not to talk about the second or third goals. “Swansea were sharp, disciplined and hungry. Unfortunately I believe we were not good enough, we were not disciplined enough.” The result also completes remarkable back-to-back victories for Swansea over Liverpool and now Arsenal. They are out of the relegation zone and have transformed their season with three wins in five league games under new boss Carlos Carvalhal. At the John Smith’s Stadium, Liverpool got back on track in emphatic fashion thanks to goals from Emre Can, Roberto Firmino and Mohamed Salah in a 3-0 win. The Reds had endured frustrating defeats against Swansea in the league and West Brom in the FA Cup. ‘Mature performance’ But Jurgen Klopp’s men dominated possession and from the moment Emre Can rocketed home a long-range opener in the 26th minute the result was never in doubt. Firmino extended Liverpool’s lead on the stroke of half-time when he somehow squeezed the ball home from the byline after being played in by a clever Sadio Mane back-heel. Klopp had left Dutch defender Virgil van Dijk on the bench, but the absence of the club-record signing was hardly noticed as the Reds continued in cruise control. Salah completed the scoring from the penalty spot in the 78th minute after Can was tripped up in the box. “We had to keep the ball and score at the right moments. Overall it was absolutely deserved,” Klopp said. “It was exactly what we needed. It was not a brilliant performance, but it was very mature and exactly what we needed at the right moment.” A Mark Noble penalty helped West Ham shrug off the disappointment of their embarrassing FA Cup fourth round defeat at Wigan with a hard-fought 1-1 draw against Crystal Palace. Roy Hodgson’s much-improved Eagles grabbed the lead in the 24th minute when Christian Benteke rose to steer an Andros Townsend cross home from close range. But the Hammers were level just before the break after Javier Hernandez was brought down by James Tomkins in the box. Hernandez came closest to a winner when his 51st-minute effort was]]>