As the name suggests, the French bulldog appeared in France, it is even the only dog native to the city of Paris. The breed was born in the19th century as a result of multiple crosses between English Bulldogs and raccoons. French bulldogs were used as guard dogs in butcher shops or rat killers: we were far from its current use…

Nowadays, the French bulldog is indeed a pet dog above all. It is for this reason that it is classified in Group 9 of the nomenclature FCI (International Cynological Federation), called “Pleasure and Company Dogs”. The temperament obviously varies from individual to individual, but dogs of this breed are usually of a lively and playful character. Very attached to their social group, these dogs appreciate children and are good companions for the elderly.

The characteristics of the French bulldog

In morphological terms, the French bulldog is undoubtedly a special animal. This short-haired dog has a developed, square head, with wrinkles and creases. His nose is rolled up, which makes him a snorer when he sleeps. It is stocky, has a developed musculature and short limbs. Its tail is folded over itself. The breed standard states that an adult individual weighs between 8 and 14 kilograms, with a size well-proportioned to weight. 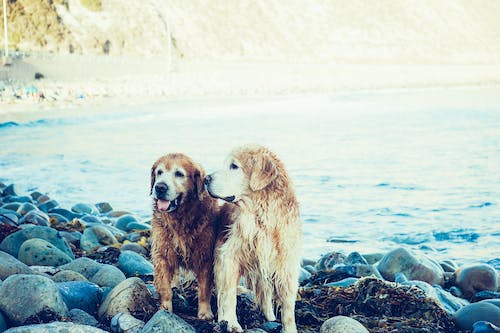 The French bulldog is, unfortunately, part of a breed predisposed to health problems. It is one of the brachycephalic dogs, literally meaning “who has a short skull”: this characteristic anatomy has as its main representatives the bulldogs and Persian cats, which have the peculiarity of possessing a crushed face. While some are doing quite well, others have what is known as brachycephalic syndrome, indicating a set of clinical signs that can interfere with the animal. This is called hyper type: selection to model the breed according to the desired physical standards can lead to drifts detrimental to the health and well-being of the animal. Finally, its short legs and massive body predispose it to joint problems.

Thus, the French bulldog may present respiratory or digestive problems due to its morphology. Therefore, it is important not to impose stretched or prolonged physical exercises, or to leave them exposed to high heat. In addition, this animal may have difficulty breathing in confined or poorly ventilated spaces, as is the case in a car or in an airplane hold… This is why many airlines forbid these breeds from traveling on their aircraft: find out if you want to leave with your companion!

It is impossible to talk about health without taking an interest in food, a key topic in many current studies. Food has long been shown to affect health, so it’s important to choose it well.

Once the croquettes have been chosen, how can I feed my French bulldog?

If you change kibbles, even moving from one product to another within the same range or brand, it is important to make a food transition. This will allow the fragile ecosystem that is your dog’s digestive flora to adapt to his new diet and thus tolerate his new croquettes. To do this, gradually reduce the number of old croquettes while at the same time increasing the number of new croquettes in the ration.

It is essential that your dog has permanent access to a bowl of clean, freshwater. In particular, make sure it hydrates well in the summer, and keep it cool in this high-risk season: because of its flattened snout, it is less able to cool down than other dogs.

Meals should be given regularly, preferably by splitting the ration into two or even three meals a day. Reducing the amounts given per meal by dividing the ration into several meals throughout the day reduces the risk of flatulence, which is a recurring problem in French bulldogs. Brachycephalic dogs swallow a lot of air when eating and this can cause them this type of digestive problems.

If your dog eats too fast, there are solutions. You can opt for a special bowl (called an anti-glutton bowl) that helps slow down food intake. You can also scatter or hide treats in your garden or in a room in your home, or place them inside games such as vending balls or excavation mats. In addition to preventing your French bulldog from swallowing his croquettes, these games are very positive for him: as he takes longer to find them, they provide him with occupation and encourage his instincts of excavation and research.

Avoid giving your dog leftovers in addition to his daily ration. Extra food is an important weight gain factor and some foods are toxic to your companion (chocolate, onion, grapes…). In addition, some dogs may have allergies.

Thus, the French bulldog is an endearing but very specific breed, whose peculiarities must be known in order to be able to take good care of it. At the food level, care must be taken to provide the elements it needs to maintain its muscles and joints and to maintain a weight of shape. This breed is predisposed to certain problems such as too fast a food intake or flatulence, but there are solutions to remedy it.

Quick Guide To Know About Sip – Types & Benefits Of Investing

Do you receive dividends from ETFs in Singapore?

What kind of incenses are used in Catholic Church