The thermal relay consists of heating elements, a bimetallic sheet, contacts, and a set of transmission and adjustment mechanisms. The heating element is a resistance wire with a small resistance value, which is connected in series in the main circuit of the protected motor. The bimetallic sheet is formed by rolling two metal sheets with different thermal expansion coefficients. Thermal relays are often used in motors, other electrical equipment,  as well as electrical lines. When the motor is overloaded, the current passing through the heating element exceeds the set current, and the bimetallic sheet is heated and bent upwards to break away from the gusset plate so that the normally closed contact is disconnected. Since the normally closed contact is connected to the control circuit of the motor, its disconnection will make the contactor coil connected to it de-energized, so that the main contact of the contactor is disconnected, the main circuit of the motor is de-energized, and the overload protection is realized. After the thermal relay operates, the bimetallic sheet cools down for a period of time and can be reset by pressing the reset button. 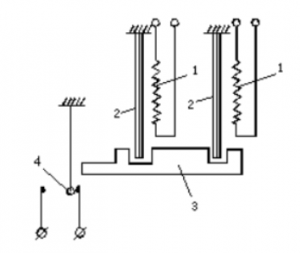 The most commonly used thermal relay types are:

Bi-metal sheet type: The bi-metal sheet is made of two metals with different expansion coefficients, usually manganese-nickel-copper plate, which is rolled to be heated and bent to push the lever and make the contact move.

Thermistor type: A thermal relay made of the characteristic that the resistance value changes with temperature.

As electrical equipment, there are many types of thermal relays mainly used for motor overload protection, but the most commonly used thermal relays are bimetal thermal relays. The utility model has the advantages of simple structure, small volume, low cost, and good inverse time protection characteristics on the basis of selecting appropriate thermal elements. At present, the thermal relays produced in my country are all bimetallic, which are often combined with contactors to form an electromagnetic starter.

In the following part, Easybom will give a further introduction to the working principle of thermal relays.

When using a thermal relay to protect the motor from overload, connect the thermal element in series with the stator winding of the motor, connect the normally closed contact of the thermal relay in series with the control circuit of the electromagnetic coil of the AC contactor, and adjust the setting current adjustment knob to make the zigzag lever and the putter are separated by an appropriate distance. When the motor is working normally, the current passing through the heating element is the rated current of the motor. The heating element heats up, and the bimetallic sheet bends after being heated, so that the pushrod just contacts the zigzag lever, but cannot push the herringbone lever. The normally closed contact is in a closed state, the AC contactor keeps pulling in, and the motor runs normally.

The overload protection of thermal relay:

The functions of other parts of the thermal relay are as follows: the left arm of the zigzag lever is also made of a metal sheet. When the ambient temperature changes, the bimetal in the main circuit will be deformed and bent to a certain extent. At this time, the left arm of the zigzag will also deform and bend in the same direction, so that the distance between the lever and the push rod remains basically unchanged, ensuring the accuracy of the action of the thermal relay. This effect is called temperature compensation.

The phase failure protection function of the thermal relay is provided by the differential amplifier mechanism composed of inner and outer pushrods. When the motor works normally, the current through the thermal element of the thermal relay is normal, and both the inner and outer push rods move forward to the proper position. When a phase of the power supply is disconnected and causes a phase loss, the current of this phase is zero, the bimetal of this phase is cooled and reset so that the inner pushrod moves to the right, and the bimetals of the other two phases are bent due to the increase of the current, making the outer push rod move more to the left. Due to the differential amplification, the normally closed contact is pushed to disconnect within a short period of time after the phase failure occurs, so that the AC contactor is released, and the motor is powered off and stopped to be protected.

Differences Between Thermal Relay and Fuse

What is the difference between thermal relay and fuse?

The function of the thermal relay is overload protection.

The function of the fuse is overload and short circuit protection.