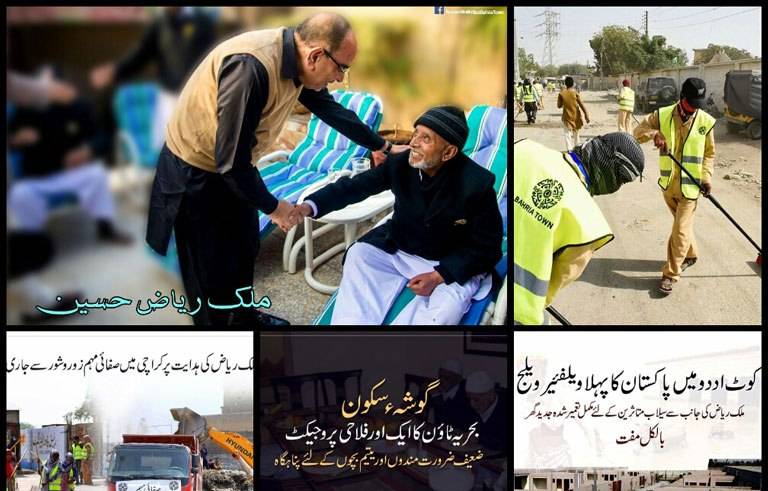 Most of the NRI Pakistanis and their families have been overjoyed after hearing the decision made by honorary Supreme Court, of accepting Bahria Town’s offer to pay Rs 450 billion. Bahria Town’s Chairman Malik Riaz Hussain is poured with all the appreciation and congratulations messages by thousands of people in the country and abroad. On the other side, all the real estate agents, builders and people involved in  property business along with the allottees from Rawalpindi, Lahore and Karachi, who are literally feeling relaxed after the important verdict by the supreme court , also sent in their congratulation messages to Malik Riaz Hussain. The Supreme Court’s decision as rejuvenated the lives of thousands of people involved in the construction business.

Malik Riaz is that one person who has never been high on attitude and always been open about his humble origins whilst being a small cantonment board contractor. There was a time when he has to sell his household items in order to fund his daughter’s treatment at the Holy Family Hospital. He has emerged as one of the leading philanthropist, spending billions in charity, free treatment and food to feed thousands of orphans, widows and the elderly. Malik riaz gives the reference of the holy Quran where he said that the Almighty gives 70 fold to all those who help the underprivileged. But in his case, malik riaz says that he has got it 700 fold from lord for all his contributions. As per him, he started doing the charity even when he didn’t have the sufficient means but still decided to go along with it. “Whatever I spent to help is not mine, it is the Lord’s blessing,” Malik believes.

Malik Riaz founded Bahria Town, Rawalpindi, in order to provide the most modern European standards of living for lakhs of people. This was then followed by all Bahria Town projects in Lahore and Karachi which gained huge success across various communities in the country.

If we talk about the bahria town in Karachi, they are busy in plotting down the third largest mosque in the world after Khana-e-Ka’aba and Masjid-e-Nabvi (SAW) with an investment of more than billion rupess. On the same grounds, Bahria Grand Mosque at Lahore is the infest example of the architectural beauty of the country and can accommodate more people than the Faisal Mosque, Islamabad and Badshahi Masjid, Lahore combined. All of these mosques exhibit the most idiosyncratic and exclusive architectural designs depicting Muslim world’s magnificent artistic impressions. All the mosques are fully air-conditioned and the Bahria town takes care of all the Iftar and Taraweeh arrangements during the Ramadan.

Those living in the Bahria projects across the country are supplied with in-house water treatment facility. Their houses are equipped with state-of-the-art safety and security systems. Dedicated fire brigade units are available round the clock at the Rawalpindi, Lahore and Karachi projects and also remain available to fight fires anywhere in these cities free of cost.

On Thursday, Malik Riaz put forward his gratitude towards all the well wishers and investors after the verdict form the Supreme Court.

Malik Riaz can be touted as one of the only real estate developers who have been rewarded for developing most advanced residential estates, in the recently concluded Malaysian international festival. He did receive all the important coverage and limelight by the international print and electronic media outlets for bringing the most advanced and exclusive construction design. Most of the prestigious magazines and journals have covered the Bahria Town projects with all the big praises for Malik Riaz Hussain. Everyone has appreciated the state of the art  Bahria Town projects in Karachi, Lahore and Rawapindi which are par to the standards in Europe, the Middle East, Asia and the Far East.