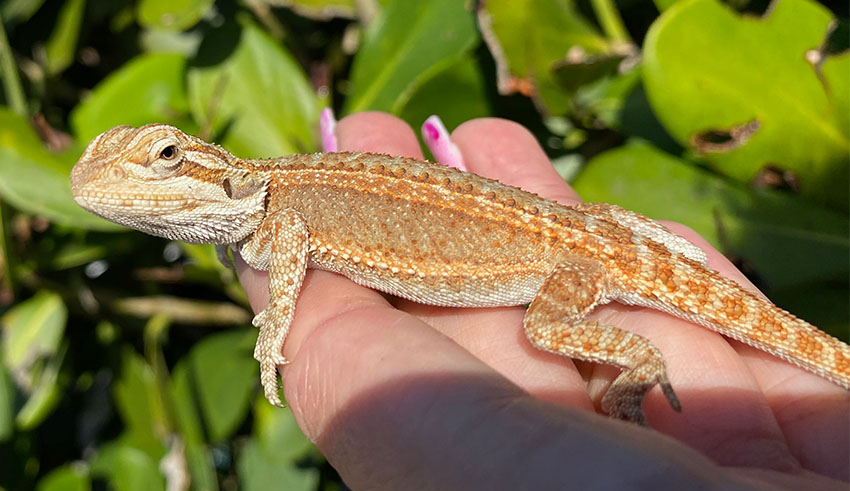 There are dozens of pet lizard options out there. From the mighty monitor lizards to tiny anoles, it can be tricky knowing where to start. You might think that smaller lizards are automatically a safe bet but size alone isn’t enough to determine if a particular lizard species (or any animal for that matter), would make a suitable pet. Instead, the qualities to look for in a great beginner pet lizard are:

Caring for a lizard—and reptiles in general—is usually a lot lower maintenance than caring for a traditional pet like a dog or cat. That being said, there can still be a bit of a learning curve when it comes to caring for a cold-blooded animal. To set yourself up for the best lizard-owning experience, choosing the right type of lizard can make all the difference.

To kick off our list of lizard recommendations is everybody’s favorite: the bearded dragon. Also sometimes referred to affectionately as “beardies” they are one of the most popular pet lizard species for both beginners and the experienced. Averaging about twenty inches in length (from nose to tail) and covered in spikes, these prickly guys may look intimidating but they’re actually total softies. Bearded dragons are laid-back both in temperament and in their requirements.

Hailing from the deserts of Australia, beardies like their environment hot and dry. This means their owners don’t have to worry about drastic changes in their night and day temperatures nor do they have to worry about humidity levels (which can be pretty tricky).

But the main reason why this species is a fan favorite is because of their above-average intelligence. This quality has resulted in bearded dragons being one of the most affectionate of all reptile species. Bearded dragons can be taught tricks, recognize their owners (and even other animals), and can even be taken on walks. Bearded dragons offer a highly interactive pet-owning experience that’s the closest to keeping a dog.

Looks aren’t everything, but it’s impossible to deny that the leopard gecko’s cuteness isn’t a major part of its appeal. They get their namesake from the spotted pattern on their heads and bodies, which is accompanied by large, sweet eyes and a perma-grin on their friendly faces. At their largest, leopard geckos might grow to be half the size of a bearded dragon. In most cases, these geckos only grow to be about 7 inches long.

Leopard geckos also have a personality that’s as pleasant as their appearance. Calm, docile, and friendly, these are fairly social lizards that are tolerant of frequent handling (don’t overdo it though). One unique aspect of these guys is that they chirp and squeak to communicate with their owners. If you’re looking for a pet lizard that might talk back to you, this is the species.

When it comes to caring for leopard geckos, they make it easy as a 15-20 gallon tank will do. They don’t have sticky toe-pads like other geckos, so you don’t need to buy an extra tall (and more expensive) tank to house them in. They like moderate temperatures with an equally moderate gradient between night and day. Even better is that they’re very forgiving in case you don’t get it perfect the first couple of tries.

A pet that permanently looks like it just ate some blue candy? Hilarious. But blue-tongued skinks make great pets for far more than just looking funny (fun fact: their blue tongue helps protect them in the wild by reflecting ultraviolet light which distracts their predators). They have great temperaments and a high threshold for human interaction. Their care requirements are straightforward and they don’t get too big, making them easy to house.

Despite being rather large and by far the heaviest of all beginner-friendly lizards, blue-tongue skinks are gentle giants that are known for having strong attachments to their owners. They actively seek out their owners looking for pets, scratches and cuddles. Once hand raised, they’re docile, quiet, and very friendly.

Where To Find Your New Pet Lizard

Now you have an idea of which lizard species to start with (or at least, which qualities to look for) but that’s just the first step. Next is finding your new scaly pet. You can find all sorts of lizards including bearded dragons for sale at online reptile shops. These specialty stores often have the best selection of lizards and morphs, along with all the equipment you need to care for them in one convenient location.