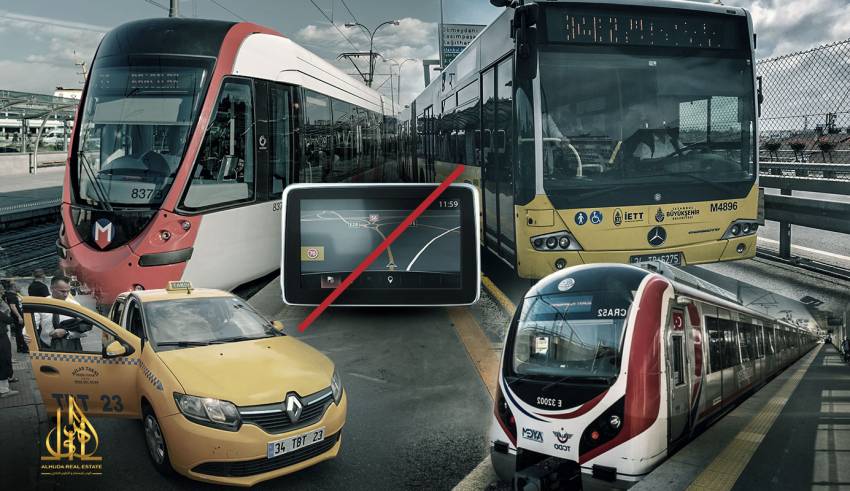 Home real estate Without GPS … Learn about all of Istanbul Transportation

Do you know that you are lucky because you are looking and exploring all means of transportation in Istanbul, Turkey?

Yes, you are lucky because you are either a tourist, a resident, or willing to live in the paradise of the earth and one of the most beautiful global cities.

The great demand on the part of tourists and those wishing to own a property in Turkey did not come from lack, for these people chose beauty, nature, history, infrastructure and most importantly they chose a city that is considered one of the most powerful cities in the world in terms of transportation network, which is the number one requirement for every researcher to travel comfort during Spend his vacation or through his daily commute to the workplace if Istanbul chooses to live and settle.

Good knowledge of the map of various means of transportation in Istanbul allows you to go to all points in different ways “by land and sea” and saves you a lot of time and effort, and below we show you all transportation in Turkey and all its lines in detail.

Among the most prominent and most important means of transportation in Istanbul that operate from six in the morning until twelve at night, we find the metro with all its branches, as it reaches through 6 main and major neighborhood lines in Istanbul and is distributed as follows:

It is the longest line in Istanbul that connects the International Ataturk Airport and Yenikapi, and it is also called the Aksaray Metro, which includes 18 stations and a sub-line with 5 other stations. By land towards other Turkish states from Istanbul and the Zeytinburnu Station, which is the largest shopping and commercial station with wide demand by foreigners, in addition to many stations that have major malls and tourist places such as Kocatepe and Topkapi.

The second line, called the old Taksim, connects YeniKapi and Haciosman along 16 stations that reach the most prestigious areas of Istanbul and the most prominent shopping points for the wealthy. Among its most important stations are the famous Taksim Square, the heart of Istanbul, and the Sisli area, where the Cevahir Mall is the favorite shopping for tourists and Arab residents. In addition to the Levent commercial area.

This line, called “Olympic Line”, is located in the western part of Istanbul, and it includes 11 stations from Kirazli to Basaksehir, and one of its most important stations is Istoc, through which you can easily reach the Mall of Istanbul.

The third line is considered eligible to become of great importance due to the volume of real estate projects being built on its outskirts, especially in the Olympiad and Basaksehir region.

In addition to the European section, the Istanbul metro network also extends to the Asian section, where the fourth line connects Kadikoy and Tavsantepe through 19 stations, including Kadikoy marine station with its markets and beautiful views.

The line is expected to be supported by a station that connects directly to Sabiha International Airport.

It took 9 years to build the Marmaray Line, at a cost that exceeded 3 billion euros.

It is the shortest Istanbul metro line, which includes only 4 stations and one of its most prominent stations is Levent, which is a point of intersection between it and the second line.

In addition to the metro and tramway, the Metrobus is one of the most important and fastest means of transportation in Istanbul at all. It is a double-length bus consisting of 3 cars that move quickly from one station to another with a time of no more than two minutes.

This method has achieved great success, as it has a special path, avoided collision with the major traffic congestion points in Istanbul.

There are 8 branches of the Metrobus buses, the most prominent of which is transported between Beylikduzu in the European side, Avcilar, and Sogulücesme in the Asian part.

They are buses of small size that connect between the sub-regions are written on the front glass front of the bus, have colors varying between blue and green and diabetes and are paid in cash, unlike government buses via the Istanbul card.

Many travelers in Istanbul accept collective taxis known as dolmus, which usually accommodate 9 passengers, can stop and get off at any place they want, and the dolmus price is low compared to regular taxis.

One of the most available means of transportation through various parts and neighborhoods of Istanbul is taxis, which usually run according to an electronic counter that starts from the price of 4 pounds.

Istanbul also has many taxi applications that can be used to save effort and time.

Istanbul, this marine city character, contains marine transport means that allow travelers to move within the sea and enjoy its scenic views at the same time, as flights that start from 700 to 1200 passengers from small ports depart on the head of almost every 20 minutes.

Istanbul Card is the conductor card that is used for transportation through all means of transportation in Istanbul except for minibusses and some types of taxis.

The card is filled out by placing it on the machine and entering a sum of money in the place designated for cash.

Istanbul card usage rates vary according to the mode of transportation, the number of uses and the long travel distance.

It is Istanbul where you find in every corner of it a means of transportation, especially in the areas of modern residential gatherings and new real estate projects that the Turkish authorities focus on providing with new lines for buses, metro, tramway, and Metrobus to facilitate transportation to and from it.