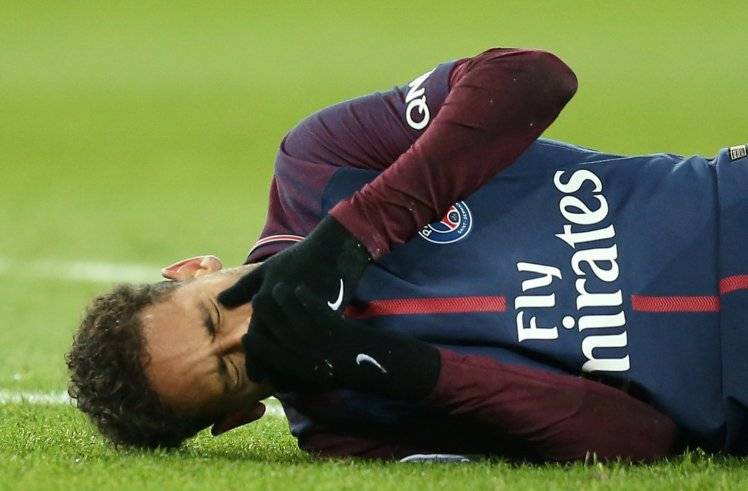 World most expensive footballer Neymar facing six weeks out injured for Paris Saint-Germain Neymar’s broken foot and sprained ankle will keep him out of action for at least six weeks, his father said on Tuesday, but no decision has yet been made on whether surgery will be required to repair the damage. The world’s most expensive footballer Neymar suffered the injury in PSG’s 3-0 win over Marseille on Sunday, with tests showing he has cracked the fifth metatarsal in his right foot along with an ankle injury.  and the Brazilian was in tears as he was carried off the pitch at Parc de Princes.   There had been fears that the injury could be season-ending, but PSG coach Unai Emery has denied reports that the Brazil international will undergo surgery. His father said the damage was such that Neymar would definitely miss next week’s Champions League encounter against Real Madrid. “PSG know that they won’t have Neymar in the next few games and that they won’t have Neymar for the next six weeks at least,” he told ESPN Brasil. “Because this treatment is going to take six to eight weeks, we know that, whether it is surgery or conventional, it will be six or eight weeks.” Neymar Senior said his son and the French club were waiting to see the Brazil’s national team doctor before deciding whether or not the forward needed surgery. Brazil’s most important player in recent years, Neymar is a key part of the squad that will head to the World Cup finals in Russia in June. “They will decide together,” Neymar Sr said. “It is a difficult time for us. We don’t want to be in this situation. But we have to accept it and help Neymar as best we can.” The comments made live on air to a sports talk show contradicted those of Paris St Germain manager Unai Emery, who had said the 26-year old could be ready for the season-defining clash against Madrid. PSG trail Real 3-1 ahead of the last 16 second-leg game in Paris on March 6. Neymar has scored 28 goals and provided 16 assists for PSG this season.Neymar will be expected to miss the Champions League clash against Real Madrid on March 6, but should recover before the end of the season and the World Cup.