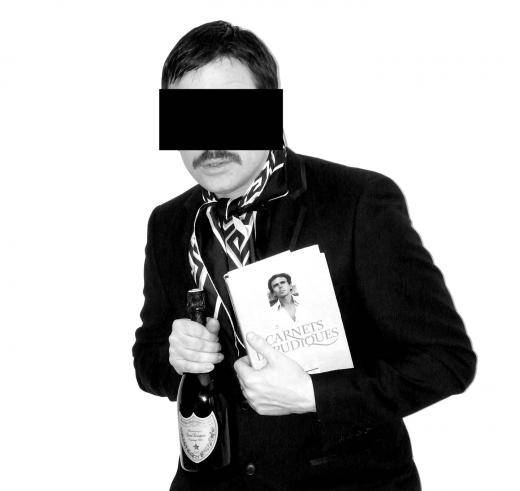 We asked celebrity connoisseur & French author, Jean Motell, to spill his styling secrets he stole to celebrities like Frank Ocean, Sam Fender, Travis Scott, Luke Day and even Serge Gainsbourg. Having observed celebrities in fashion week for ten years, the most French of exiled musicians in Los Angeles gave us his vision of the essentials of fashion, with the humor that we know him.

“When I take off a cap that’s too visible, or a watch that’s too shiny, not only does it correspond more to the minimal and elegant approach I want to infuse into my music and my books, but it also gives me a lot more impact and insurance with my interlocutors. This is something that we find in Sam Fender elsewhere” says Jean Motell.

“Frank Ocean doesn’t hesitate to wear amazing moccasins with way too short pants. In everyday life it’s a ridiculous outfit to go to work but trust me you’ll look perfect in the front row at a Balenciaga show ” says Jean Motel.

“If you think you have a dumb face, overplay. Believe me I know what I’m talking about! I won’t name too many celebrity names but on the American music star side, you will easily have the musicians who play on their faults: too much thinness should not prevent you from appearing shirtless in all your clips. If you have large ears, do not try to camouflage them but on the contrary wear bobs that put them well in. This is exactly what I’m talking about in my first book “How to make it when you’re broke and nobody” says Jean Motell.

“Nothing worse than wearing sunglasses at night, no one has done this since 2010. There have been a few attempts by Travis Scott but it makes it look more like a spring breaker from Montana. Concerning accessories, the best thing to do is wear a cap, if possible avoiding the Balenciaga logo cap. In my “Ambulance” clip, I wear a Commodore 64 cap and that remains a safe bet for me ” says Jean.

“It is not because I am French that I recommend it. We find that with Serge Gainsbourg but also with Don Johnson in Miami Vice. Not only will you no longer lose socks in the washing machine, but you will also encourage people to go live in a warm and sunny place. This is a positive influence of fashion advice and it is not that common. This is the reason why I chose to open my art gallery in Los Angeles and not in Kiev! ” says Jean Motell.