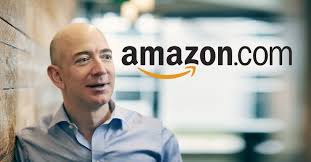 Amazon shares jump after earnings looks like clear winner of the mega-cap tech earnings season Amazon reported a stellar fourth quarter and is watching its stock rise on Friday as a result. According business insider reports Shares of Amazon are up 5.42% to $1,465.32 after reporting earnings of $3.75 per share compared to $1.83 that Wall Street was expecting. Earnings were boosted by a one-time $1.59 per share windfall from the new US tax law. The company reported revenue of $60.5 billion versus the $59.85 billion anticipated by Wall Street. A number of analysts raised their price target for Amazon shares. Here are some of the biggest moves: Morgan Stanley raised its target to $1,500 from $1,400 Barclays upped its price target to $1,580 from $1,210 Credit Suisse raised its price target to $1,750 from $1,410 Mizuho raised its price target to $1,700 from $1,300 J.P. Morgan raised its price target to $1,650 from $1,385 Bank of America Merrill Lynch raised its price target to $1,650 from $1,460. Amazon forecast that its operating income for the first quarter of 2018 would be between $300 million to $1 billion, below the $1.5 billion street consensus, likely indicating heavier investments going forward. But this did not worry analysts. Microsoft and Facebook both reported earnings on Wednesday, and each faced their own struggles. Investors were concerned over Microsoft’s slow growth and sent to stock down 0.79% on Thursday after earnings. Facebook was forced to soothe investors worries about a 50 million hour-per-day drop in time spent on its newsfeed and ended Thursday up 3.32%. CEO Jeff Bezos pointed to the massively popular Alexa voice-assistant as the biggest driver of the quarter’s success. “Our 2017 projections for Alexa were very optimistic, and we far exceeded them,” Bezos said in the report. “We don’t see positive surprises of this magnitude very often – expect us to double down.” The company also reported sales from its Amazon Web Services that reached $5.1 billion in the quarter. Google’s comparable web service sales hit $1 billion. First quarter revenue guidance came in the range of $47.75 billion to $50.75 billion, above street estimates of $48.6 billion. But operating income guidance was between $300 million to $1 billion, below the $1.5 billion street consensus, likely indicating heavier investments going forward. according some media reports e commerce gaint Amazon has been in heavy investment mode in recent quarters, pouring money into warehouse and data center expansion, while adding more video content for its Prime Video offering. Its total costs jumped 38 percent in the fourth quarter year-over-year, to $58 billion, a significant jump from the 23 percent cost increase between the fourth quarter of 2015 and 2016. Physical stores revenue, which primarily comes from Whole Foods, came in at $4.5 billion. This is the first full quarter to have Whole Foods revenue included in Amazon’s sales, and Olsavsky said the company’s “very happy” with the initial results of the grocery chain.]]>