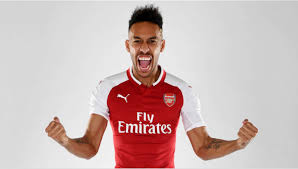 Arsenal 5 Everton 1: Aaron Ramsey hat-trick and three assists for Henrikh Mkhitaryan ,Pierre-Emerick Aubameyang nets on debut It was a dream debut for Pierre-Emerick Aubameyang as Arsenal destroyed Everton 5-1 at the Emirates.Debutant Aubameyang scored Arsenal’s fourth while Mkhitaryan laid on three assists, for two of Aaron Ramsey’s treble and his former Dortmund team-mate, as Arsene Wenger’s side continued their exceptional run of form at home.

Laurent Koscielny also got on the scoresheet with a diving header as Arsenal scored four at home in the Premier League for the second game in a row, though as against Crystal Palace a fortnight ago they conceded a sloppy second half goal, in this instance from Dominic Calvert-Lewin. Though Arsenal still have a five-point gap to make up to the top four if they can replicate today’s blistering offensive display on their travels there is reason to hope, not least with the dynamic duo of Aubameyang and Mkhitaryan in their frontline. Within six minutes the Gunners were slicing through Sam Allardyce’s supplicant defence. Aubameyang and Ozil combined to release Mkhitaryan in behind down the right, the Armenian sliding a pass back for Ramsey to tap home. Victory was secure, Ramsey adding lustre to the scoreline as he drilled home Mkhitaryan’s cross to earn his first Arsenal hat-trick, but Wenger is unlikely to get carried away after his side followed up their drubbing of Palace with a dire display in defeat to Swansea. Laurent Koscielny also scored for the hosts, while Dominic Calvert-Lewin hit a consolation to deny Petr Cech his 200th clean sheet. Arsenal XI: Cech, Bellerin, Koscielny, Mustafi, Monreal, Ramsey, Xhaka, Iwobi, Ozil, Mkhitaryan, Aubameyang Arsenal subs: Ospina, Chambers, Kolasinac, Maitland-Niles, Elneny, Wilshere, Lacazette Everton XI: Pickford, Kenny, Keane, Williams, Mangala, Martina, Schneiderlin, Gueye, Walcott, Bolasie, Niasse Everton subs: Joel, Rooney, Tosun, Sigurdsson, Davies, Calvert-Lewin, Holgate]]>