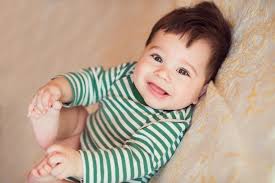 Multi-origin names with different positive meanings in different ancient languages are never out of the trend. For beautiful names of all time, some of the popular languages preferred include Sanskrit, Latin, Greek, Hebrew, Persian. These languages not only offer a broad selection of words but also provide several meaningful choices that reflect multiple characteristic traits. Let’s have a look at some of the uncommon but sweet and meaningful Indian Baby Boy Names in Sanskrit and some other languages.

1) Abeer: In India, the name refers to the fragrant powder used in Holi and some other auspicious occasions. In Arabic, the name symbolizes fragrance while it means strong in Hebrew.

2) Abiram: The name not only reflects the inspiring characteristic traits of a child but also shows the wonderful personality of his father. It means my father is proud/of high moral in Hebrew context. It also means someone very close and in Sanskrit it signifies a pleasant or beautiful personality (Sanskrit: Abhiram).

3) Adim: Adi means the first and hence the name also signifies the traits like primitive or aboriginal in Sanskrit. Someone associated with earth is also called Adim. In Urdu, the name means the Universe.

5) Akil: The name refers to someone with high intellect in Egyptian or Arabic languages. A variant of the name, Akhil signifies something or someone who is perfect or complete/whole.

6) Ashan: In Urdu, the name reflects the personality of a person who is attractive and it also signifies some positive characteristics like gratitude and obligation. Also, the name refers to Indian-Laurel or a rock in Sanskrit.

7) Aveen: The name literally refers to a bird in Sanskrit. In Urdu, the name means grace or beauty or Ashim’s son. In Islamic context, the name also signifies love, purity or something which is crystal clear.

8) Danish: In Persian context, the name refers to science, wisdom or knowledge. It reflects an intellectual personality. In Sanskrit, the name is inspired from the word, ‘Dan’ which means donation and Ish means God which brings out the meaning of the name as the Lord who donates.

9) Meer: It’s a popular name in Bengali and also used in multiple languages like Urdu and Sanskrit. In Bengali, Meer means the red color, while in Urdu it refers to a leader. Also, the Sanskrit context signifies the name’s meaning as an ocean.

10) Naman: In Sanskrit, the name refers to a humble and gentle personality. In Hebrew and Islamic contexts, it means pleasantness or a pleasant personality.

Names are one of the best gifts that parents give to their children and it remains intact with the child’s personality since the day of birth to the end. Choosing a suitable name may require immense attention and research as a name may have positive or negative meanings in different languages or cultures. The above names have been selected after a research and after diving into the bibliography of different languages. The above names offer a blend of different positive meanings straight from popular cultures across the world. These names are short, trendy and pleasant to the ears as well and hence suitable for modern babies in India.