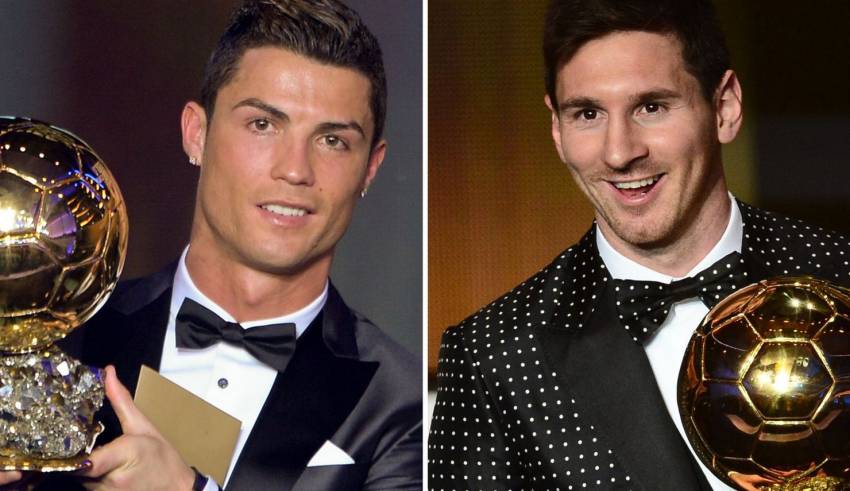 <![CDATA[]]>
<![CDATA[]]>
Home Sports Cristiano Ronaldo has made his claim. Now he has to live up to it when he face Lionel Messi. “You will go and say that I have a big head, but when you’re at the top, it’s normal that you’re criticized,” he told France Football. “I am the best player in  history, in both good and bad times.” Personalities aside, Ronaldo has a tough case to make.He and Messi both have four Champions League titles, but Messi’s eight Spanish league titles double Ronaldo’s tally for Madrid and Manchester United.Messi also has the edge in their head-to-head duels. Barcelona star Messi has outscored Ronaldo 19-17 since Ronaldo joined Madrid in 2009. Prior to that, Messi scored in a 2-0 win over Ronaldo’s Manchester United in the 2009 Champions League final. The Barcelona has also had a clear advantage over Ronaldo’s Madrid. Messi has helped Barcelona beat Ronaldo’s side 13 times, to eight wins for real  Madrid and seven draws.Overall, Messi holds the great record with 24 goals in 36 matches. Ronaldo is one goal shy of matching Madrid great Alfredo Di Stefano’s 18 goals against Barcelona. The camera-shy Messi insisted again on Monday when he was recognized for leading the Spanish league in goals last campaign that he put more value on team titles than individual honors.“winning Titles are our main goal,Lionel Messi told in his interview . “If individual statistics are there also, that’s even better, but they are not the main objective.’Ronaldo has no doubt closed the gap with Messi after he led Madrid to back-to-back Champions League titles in the last two seasons. But for Atletico Madrid striker Fernando Torres, this past decade is still set to bear Messi’s mark. “If it wasn’t for (Ronaldo), Messi would have won twice as much,” Torres said Wednesday. “What Ronaldo has done in the age of Messi says a lot about him.” Ronaldo will need to be at his best on Saturday because anything other than a victory will deal a huge blow to Madrid’s title defense before the season reaches its midway point.Madrid enters the match in fourth place and trailing Barcelona by 11 with a match in hand. Atletico Madrid and Valencia are in second and third. Given the situation, we are in we are obligated to win,” Madrid defender Sergio Ramos said.Messi had one of his most memorable performances at Madrid last season when he scored his second of two brilliant goals in stoppage time to silence the Santiago Bernabeu. Madrid got revenge with wins of 3-1 and 2-0 in the Spanish Super Cup in August when Barcelona was reeling from the departure of Neymar to Paris Saint-Germain. Barcelona coach Ernesto Valverde, however, quickly rallied his team and the Catalan club has not lost since, a run of 24 matches. With Neymar gone, Valverde has succeeded in tightening up Barcelona’s defence.It would be important to win for everything that would represent, since the match is so special, and we are playing at their ground,” Messi said. “There would still be a long way to go for the league title, but a victory would be a nice before the Christmas break.”Here are some other potential keys to the “clasico”: SUAREZ Striker Luis Suarez has rediscovered his form at just the right time for Barcelona. After only scoring three goals in the first 11 matches for Barcelona, Suarez has six goals in his last five league matches for Barcelona. barcelona will need him even more with backup forwards Paco Alcacer and Gerard Deulofeu injured. BENZEMA Karim Benzema has only scored two goals in 11 league appearances for Madrid this season. The drop in production has contributed to Madrid’s stumbles, leading many fans to lament the exit of Alvaro Morata to Chelsea. ALBA Jordi Alba has flourished going forward into the place that barzilian star striker Neymar used to occupy. Spain left back is a favourite of Messi to weave together short-passing combinations that unlock packed defences. His matchup against Madrid right-back Dani Carvajal should be key. BALE Gareth Bale is playing for his future. Recurrent injuries have cost the Wales winger his spot in Madrid’s starting lineup, with coach Zinedine Zidane preferring the playmaking_ and sturdier legs _ of Francisco “Isco” Alarcon. Bale returned after his latest injury layoff to help Madrid win the Club World Cup, but as a second-half substitute. He is likely to have that role against Barcelona and will need to make the most of the minutes he gets. VERMAELEN Thomas Vermaelen was considered a lost cause. That was until defenders Samuel Umtiti and Javier Mascherano got injured, giving the Belgian another chance to find his spot in Barcelona’s rotation. Vermaelen has played six consecutive matches, a personal record for him at Barcelona. Injuries limited him to 11 league appearances in two seasons before he was loaned out to Roma last year. Now that he is back, the former Arsenal player will be critical to Barcelona’s chances of stopping Ronaldo.]]>