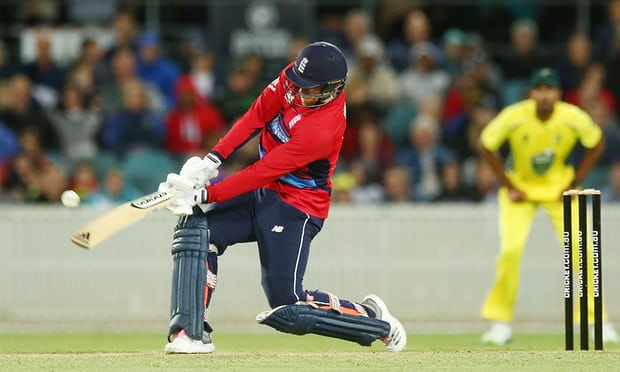 <![CDATA[]]>
<![CDATA[]]>
Home Sports David Willey almost became the first England player to hit six sixes in an over as they charged to a Twenty20 win over a Prime Minister’s XI in Canberra.

David Willey almost became the first England player to hit six sixes in an over as they charged to a Twenty20 win over a Prime Minister’s XI in Canberra.

England’s Twenty20 side got their Trans-Tasman series preparation off to an ideal start with a thumping eight-wicket win against the Prime Minister’s XI on Friday. The format might have changed, but the tourists’ dominance with the bat in the recently completed 50-over series has not diminished. They made light work of a representative side with 239 Australian caps between them.

All-rounder Willey, 27, has often opened for Yorkshire and his former county Northamptonshire in limited-overs cricket, but has never batted above number seven for England in a full international.

With Jason Roy and Alex Hales sidelined by injury, Willey opened with James Vince, adding 87 for the first wicket in six-and-a-half overs.

Willey cleared the ropes with the first five deliveries of Lyon’s second over before hitting a sweetly struck four through the covers from the final delivery, which led to ironic boos from the 8,000 crowd.

Lyon took 21 wickets during Australia’s Ashes victory and is their regular Test spinner, but has not played a limited-overs international since August 2016.

While this warm-up match does not hold official status, Willey now holds the record for hitting the most runs in an over while in an England shirt.

Earlier, Willey had taken 3-32 with the new ball at Manuka Oval, while Hampshire spinner Liam Dawson took a miserly 3-16 from his four overs.

Test batsman Peter Handscomb top-scored for the Prime Minister’s XI with 43 as they were restricted to 136-8.

David Willey almost became the first England player to hit six sixes in an over as they charged to a Twenty20 win over a Prime Minister’s XI in Canberra.

Willey hit Australia Test spinner Nathan Lyon, captaining the hosts, for 34 off the sixth over as they cruised to an eight-wicket victory.

Needing 137 to win, England eased to their target in 12.4 overs as makeshift opener Willey hit 79 from 36 balls.

A T20 tri-series co-hosted by Australia and New Zealand begins on Saturday.

“I got a chance at the top of the order with a couple of niggles and I had nothing to lose,” Willey said. “I went out with a bit of a free rein and managed to clear the ropes a few times.Spurned during the IPL auction, what odds on Willey sending the highlight of this knock to those franchise owners with a “here’s what you could have won” note? “I think my agent might do that,” he joked. His opportunity arose due to injuries to the regular openers Alex Hales and Jason Roy. “I think I’ll be sliding back down to nine or 10 for the first game. I don’t think I can walk in there and say I should be batting higher up the order!”

“I think I’ll be sliding back down to nine or 10 for the first game, that was my one chance. I don’t think I can walk in there and say I should be batting higher up the order. I do that job back home and my job with England is different.

“I’m just honoured to wear the shirt and, whatever role, I try to do the best I can.

On missing out on the sixth six, he added: “I probably was disappointed, especially in an England shirt. It would have been nicer to get the final one too but if you’re hitting 34 off an over you can’t complain.”