Whilst watching a professional boxing match, note how infrequently the boxer’s hands are down to the side. The hands are either up in a guard position, protecting the boxer’s head, or out in front, delivering blows throughout most of the fight. Boxers’ hands move a lot when it comes to punches, with 40 to 80 blows delivered every round, that’s 400-800 punches if you can manage 10 rounds. One approach to build the stamina you’ll need to keep your hands moving for 10 rounds is to use weighted gloves. 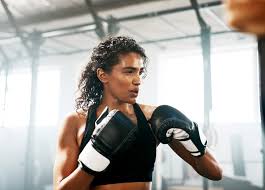 What exactly is weighted gloves?

Weighted gloves are not the same as the boxing gloves used for training. Although they wrap around and secure your hands, they don’t provide the any level of protection as a training glove or even hand wraps do. As a result, you wouldn’t use them for any target-striking training.

A weighted glove will add 2-3 Lbs. of extra weight to the back of each hand. Your thickest training gloves, by comparison, weigh just over a pound. These gloves may be worn when doing aerobic workouts, but where they really come in handy (pun intended) is shadow boxing.

Do they increase speed?

Weighted gloves, according to research and experience, improve speed. When a person first begins exercising using weighted gloves, they experience some resistance and exhaustion. However, as they become more accustomed to using greater force, their hand mobility increases once the weights are removed.

Weights have been used by boxers and combatants for a long time, but weighted gloves are a newer addition. Trainers recommended dumbbells before weighted gloves, which enhanced athletes’ speed but produced other issues such as injured joints. With the introduction of weighted gloves, this difficulty was solved while the goal was still met.

Weighted gloves, as discussed earlier, aid in the development of speed. You’re forcing your body to overcome higher resistance when you intentionally increase the weight of your hands over what it’s used to. As your body adjusts to the added resistance, you’ll notice that your hands are somewhat faster than when you’re wearing regular training gloves. Combinations with weighted gloves are a wonderful method to develop the type of hand speed that will leave your opponents bewildered and dizzy.

When you work out with weighted gloves, your body is considerably more exhausted than when you train with regular gloves or hand wraps. The extra 2-3 Lbs. per hand may not seem like much at first, but after you’ve thrown six or seven hundred punches in a single session, they’ll feel like a lot. You may discover that you can’t complete your usual shadow-boxing program the first time you attempt it since your arms will wear out much faster.

Within a few weeks, however, your muscles will begin to adapt to the increased weight by improving their strength and stamina. Punching power increases as strength increases. As you have more stamina, you can continue to deliver hard punches and maintain your defensive block even when your opponent begins to fatigue and lose their guard.

Weighted gloves have the advantage of being an all-in-one exercise tool. It helps to build speed, muscle, strength, and cardiovascular endurance all at the same time. Your cardiovascular system begins to adapt to the increased demands placed on it as you push your body further.

When you put on your regular boxing gloves again, they should feel quite light. You will be able to perform for longer periods of time when you sense less exertion on your body.

As we can see the weighted gloves have the same principle of a progressive overload, regular training with these gloves will have you throwing powerful punches at lightning speed for longer periods. They are a great tool to add to your arsenal, speaking of, get all the best gear for your training and fights.