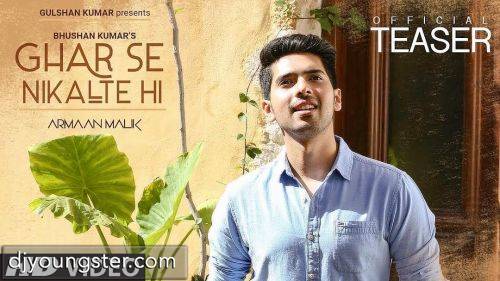 Ghar Se Nikalte Hi full song: Armaan Malik’s and amaal mallik soothing vocals capture the essence of innocent romance Armaan Malik has crooned the song that was originally sung by Udit Narayan in 1996 for the film, Papa Kehte Hain.   Ghar Se Nikalte Hi full song: Every romantic 90’s kid and kove birds will agree that the song from papa kehte hai  Ghar Se Nikalte Hi captures the emotions of a whole generation. In an era, where technology  like whatapp, facebook ,twitter and instagram  not theire technology  had very limited role to play, lovers had to make do with that one loving look, which they did get after hours of waiting. The original song from papa kehte hai , Ghar Se Nikalte Hi  song was romance at its purest best  Continuing the new trend of rehashing their own hit songs from year, T Series launched a  new version of Ghar Se Nikalte Hi  song on Wednesday. Singer Armaan Malik has crooned the song that was originally sung by Udit Narayan in 1996 for the film, Papa Kehte Hain song ghar  se nikalte hi originally featured in the Jugal Hansraj and Mayuri Kango-starrer, ‘Papa Kehte Hain’ (1996) . The new  song ghar se nikalte hi has been composed by music director  Amaal Malik while Kunaal Vermaa has penned the lyrics Ghar Se Nikalte Hi song, the new song has been filmed in the gorgeous locations of Chania, which is in Crete. The city has a gorgeous waterfront, which has been captured beautifully in the song  Amaal shared the video and tweeted, “bit.ly/GharSeNikalteHi #GharSeNikalteHi Our tribute to #RajeshRoshan @Javedakhtarjadu #UditNarayan Directed By : @charitdesai Lyrics : @kunaalvermaa77 Singer : @ArmaanMalik22 Music : @AmaalMallik Label : @TSeries. T-Series in 2018. The full video song  ghar se nikalte hi song  will also feature debutant Angel. The music has been recreated by Armaan’s elder brother, composer Amaal Mallik, with additional lyrics by Kunaal Vermaa. Talking about the single, Armaan says, “I feel fortunate that Bhushan Sir (Kumar) thought of me to reprise his all-time favourite song. It’s a beautiful melody, elevated by Amaal. The song also has new lyrics. The fun part was shooting the video in high speed; I had to sing the entire song two times faster than its original tempo!” Amaal shares, “’Ghar Se Nikalte Hi full audio song’ gave me the freedom to explore my creativity. Bhushan Kumar’s ear for music and his ability to understand the audience’s pulse make you want to be a part of his vision.” On his part, Bhushan Kumar, says, “’Ghar Se Nikalte Hi mp3‘ is like going back to an innocence that marks the emotions of love and longing of the by gone era. We felt Armaan was the right choice for it as he has a major fan-following among the youth. Shooting it in the old town of Chania (Greece) has further helped in evoking that tender, undefiled romance.” He plans to release around 20 singles this year, Amaal had earlier said about recreating old hits: “There’s an overkill of remakes. I myself have refused quite a few remakes this year alone. I don’t want to do a song remake just for the heck of it. The song has to make sense in the film’s plot. I mean, it will make complete sense to use a song from any of Sanjay Dutt’s previous films in his biopic (being filmed). But one shouldn’t do a song remake just because it’s a trend or it will make money.”