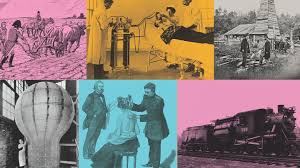 Technology has changed humankind is a way no other force has. It has not only led to the evolution of how humans lead their lives, but also created multiple avenues of livelihoods, exploration, creativity, integration, and communication.

Innovations in technology have guided almost all aspects of our lives. Right from the time the first steam engine was created to the present, our history has been divided into eras brought about by the advent of technology.

In this article, we are going to discuss the top 5 greatest innovations, which have changed human history and lives for the better. So what are we waiting for? Let us get right to it…

1. The creation of the Steam Engine-

According to historians, cars, motorcycles, factory production, airplanes, or trains would not have been created had it not been for the steam engine. The steam engine was the first application of generating power through combustion. It helped usher in the industrial revolution and take bring about centuries worth of development in a few decades.

The creation of the Steam Engine has been consistently voted as one of the world’s greatest inventions ever. The first practical use of the steam engine dates back to the year 1628 when one Thomas Savery used the technology to create a simple water pump. The Steam Engine has been responsible for the rise of economic superpowers like the USA.

2. The invention of the Modern Computer-

Can you imagine a life where you do not have a computer at your disposal? In terms of changing the professional landscape, altering economies, building modern defense systems, and creating powerful vaccines and antibodies, the computer has helped us achieve all that and much more.

It has not only helped us solve complex computational problems, but also use technology to improve the lives of humankind. Currently, you cannot think of any industry, which does not use computers to aid production, run supply chains, or even reach out to customers. Without computers, the world would have been an entirely different place.

3. The innovation behind the Telegraph-

The formal communication that we know, which exists in the present times is because of the innovation in creating the Telegraph. The first pioneer of the Telegraph was Samuel Morse, who is also credited to be the father of the Morse Code. Ever since Telegraph was founded in the 18th and 19th centuries, it has seen massive advancements.

We sometimes take for granted our ability to send long messages and communications across countries and continents. All this has been made possible because of the way in which Samuel Morse and others were successful in creating the Telegraph to send and receive communication.

Along with the computer, the development of the World Wide Web, or the internet as we call it has been proclaimed by many as to be a great tech invention for the human race. With the internet, we have access to information readily available instantaneously.

Modern work systems are systematic, streamlined, and efficient as we have been able to use the internet to help disperse information. Human beings are constantly learning different skills from the internet and bettering themselves. We are a much-integrated world after the internet has come into being.

The first four points are technologies, which have seen the heights of mainstream acceptance. Cryptocurrencies and Blockchain technology are the future of the world. Cryptocurrencies like Bitcoin and others are redefining our global financial systems and making them much more democratic and social oriented.

Likewise, thewashingtonnote.com states that Blockchain is reinterpreting the way we look at how modern information systems are going to be built. Big companies are taking to Blockchain technology as a means of further expediting processes, systems, and structures.